In the Netherlands, much debate is going on over the concept of Multi Layer Safety (MLS). The concept, which recently received the parliament’s support, includes three layers:

2. Land use planning  (looking behind the dikes)

The idea behind the concept is that besides taking preventive measures (e.g. dike enforcement), it is also important to minimize the consequences of floods.

The basic and most important part addresses prevention (layer 1). This layer includes all measures needed to prevent floods. As there is always a small chance that preventive measures will not be sufficient, it is important to minimize the effects of floods at an early stage through land use planning (layer 2). To use this layer effectively, it is important to act adequately when crisis management is needed (layer 3).

These three layers already exist in the current approach. The challenge in the MLS approach is to create coherence between them.

It can be debated whether or not this is the best approach. Groups in favor argue that cooperation between water boards, municipalities, and provinces will be strengthened which will save costs and encourage multifunctional land use. Besides, with MLS each region can decide which measures need to be taken to further develop the area based on regional ambitions (read more in this synthesis report by HKV and Oranjewoud in Dutch).

Critics argue that this approach is a political choice to prevent the large and much needed investments in flood defense structures in the first layer. In addition, no extra budget seems to have been made available for the second layer and much is still unclear about the urban planning requirements needed to be met in the second layer. (Read more concerns here).

Either way, defending the country from floods is an important topic in a country like The Netherlands. Many organizations are involved in developing strategies and advising on concepts like MLS. The Council for Environment and Infrastructure has produced a film in which they present their advisory report “Time for Flood Safety”.
Movares, an engineering consultancy, organized a symposium on MLS focusing on water and energy organizations (November 4, 2013). Watch the recording (in Dutch) here.

What now seems to be part of the second layer within MLS is something that has been done for a long time: building on flood defense structures. Not only in The Netherlands, but also worldwide there are many examples of flood prevention structures serving multiple purposes. As part of TheWaterChannel’s thematic focus on Multifunctional Infrastructure, an overview of such examples is presented below.

Besides protecting land from floods, dikes are commonly used for transport (pedestrians, bikes or cars). Depending on the material used in their construction, they can even handle heavy transport, as is the case in Gelderland for example where many brickworks can be found in the floodplains. Sheep can graze on the dikes, which maintains them in turn (see picture below: Multifunctional dike, Wageningen, The Netherlands)

Another example of a multifunctional dike is the “Climate Dike” (in Dutch Klimaatdijk). Cilmate dikes are very broad which allows space for living, parking and recreation. The city Tiel in The Netherlands faces problems when groundwater levels rise due to rising river waters. Additionally, the city cannot discharge rainfall as large parts of the city have been rendered impermeable due to urban development. Because of the width of climate dikes, they can not breach. In addition, building climate dikes offer the opportunity to build on them, thus reducing pressure on land use. Another example of a climate dike is currently constructed at Munnikenland. This dike will have stadium-like stands for walkers to rest and enjoy the surroundings which are part of the “Hollandse Waterlinie”.

In coastal town Scheveningen, a popular tourist destination, the renovation of the boulevard was integrated with upgrading of the dike. Thanks to this solution, Scheveningen remains an attractive place for tourism while protecting the hinterland and The Hague from sea flooding.
Watch the time lapse video of the construction of 2 km of new boulevard, with a 1 km dike raising 2.6 million m3 sand:

In Dordrecht, the longest shopping street in the Netherlands is also the lowest sea dike in the country. In the light of climate change and the expected sea level rise, The Netherlands developed a new delta plan in 2008. Part of this plan is to raise all sea dikes. In Dordrecht, this is an impossible task as the shopping area is monumental; a heritage site.

In the picture below (left) the level of the stairs is at “delta level”. This means that when you are on top of the stairs you are considered to be at a safe level. The front doors of the shops, however, are over 0.5 m below this safe level. As part of the new Delta Plan, the shopkeepers can place special shutters in front of their shops to keep the water out and to protect the rest of the center from flooding.

In Arnhem, the restaurant Humphreys (right) is integrated within the quay wall. The quay protects the city centre of Arnhem from floods in the river Rhine. 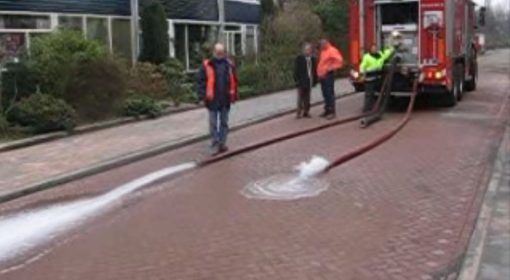