As oil-rich as the Arab region is, as poor is its fresh water supply. Luckily, the solution is right there along its coastline: desalination. The sea offers an inexhaustible resource to tap into. After the necessary treatment the seawater can contribute to the region’s freshwater supply and take some pressure off conventional water resources.

The Arab region contributes more than half of the world’s desalination capacity. This overall share is expected to grow as a result of continued industrialization, accelerated urbanization, population growth and depletion of conventional water resources. Some countries, like Tunisia , desalinate brackish water at a low cost and even promote it for domestic use. However, as demand  continues to increase, inland brackish sources  will prove insufficient, and more and more seawater will take up the share of desalination.

In UNDP’s report ‘Water Governance in the Arab Region: Managing Scarcity and Securing the Future’, it is predicted that desalinated water will expand from 1.8 per cent of the Arab region’s total water supply to an estimated 8.5 per cent by 2025. Most of this increase will be concentrated in the wealthiest countries in the region, such as the Gulf countries, who make for 81 per cent of the desalination capacity of the region at the moment. They use this scarce water supply to build cities and irrigate deserts. Increasing adoption of desalination in the Gulf countries can be largely imputed to the continuing deterioration of ground water resources. 55 per cent of the water supplied to cities in these countries comes from desalinated water, used directly or blended with groundwater. This percentage will rise as groundwater levels drop. Next to increasing water demand and deteriorating groundwater resources, technology plays an important role in the predicted increase. As desalination technologies develop, production costs drop and desalination becomes a more viable option for poor countries. In addition, water is often subsidized in Arab countries, lowering the price and pushing up the consumption further.

Having 70 per cent of the world’s desalination plants and facing a rise in this number, there is something else awaiting the Arab region in the future, according to Maud Barlow (former senior U.N. adviser on water). Scientists warn of ‘Peak Salt’, the point at which the Gulf becomes so salty that relying on it for fresh water will no longer be economically feasible. More the salt that needs to be removed, more will be the energy needed  by desalination plants. The brine that desalination plants produce, is being poured back into the sea, thereby salinizing  the Gulf which is already one of the saltiest seas in the world because of its shallowness and high evaporation rates in the hot summer season.

From brackish sources to seawater in Tunisia

In Tunisia, potential conventional water resources are concentrated in the North. A water shortage exists in the Southern part of the country, exacerbated by the growth of tourism in that region. Consequently, virtually all desalination activity is concentrated in the South of Tunisia. Desalinating brackish water from sources in the region brings about less costs than the use of seawater. The majority of the desalinated brackish water ends up in the drinking water sector. The increasing water demand, mainly driven by the tourism sector, stresses the sufficiency of the brackish sources. Therefore the focus is shifting more towards seawater. Plans for a large seawater desalination plant on one of the islands have been on the table for years, hampered by poor water management issues.

Warnings of  ‘Peak Salt’ are still considered speculative but nevertheless raise the question: How are the Arab countries going to take care of an increasing demand for desalinated water, at a time when technology can no longer deal with salt levels in the sea? Time will tell if this question will one day need to be answered, but the fact that the sea in coastal areas close to desalination plants is getting ever saltier, is inescapable. Not to mention that the concerns for economic feasibility pointed out by warnings of ‘Peak Salt’, should be accompanied by worries about environmental impacts of desalination. Desalination plants might reduce pressure on conventional resources, they pollute air, seawater and marine life along the way. In addition, desalination causes increased salt concentrations from effluents, emits trace elements and residual treatment chemicals, and greenhouse gasses (emitted while producing the plants’ energy and steam-UNDP). 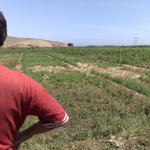