To survive and thrive small islands have to make use of their unique characteristics – however hard it is. The Azores islands – located 1400-2000 kilometres away from the Portugal main land are no exception. These nine mid-atlantic emerald volcanic islands, settled only in the fifteenth century, have in the course of time been a transit point for the early seafarers, have sourced tropical crops to the European market, been a main whaling ground and now increasingly cater for the international tourist industry with their intense natural beauty. Settled only in the fifteenth century, several of the islands witnessed an orange boom in the late eighteenth century. The fruits were sold to the Northern European market, where they were a highly valued gift in the Christmas season.  Care was taken to send the oranges as fresh as possible and to pick the fruits only when the schooners that would transport them were in sight. Then in the mid-nineteenth century it was all over – a disease and increasing competition from new shipping routes – finished the lucrative orange cultivation.

Substitute crops were tea and pineapples. The mild weather at the Azores, helped by the warm ocean currents, makes it possible to grow pineapples but only in greenhouses. Several thousand greenhouses developed along the south coast of São Miguel island.

Though the rainfall is good it is never reliable enough to grow a horticultural crops. The pineapple greenhouses hence developed their own water harvesting system, collecting water from the greenhouse roofs in gutters and leading it to ponds placed in between the greenhouses. During heavy rainfall the water was diverted away by overflow pipes. More than 100 years later these roof top systems are still the main sources of water for the surviving pineapple greenhouses. Markets have changed again and the historical greenhouses serve a local high quality market as an organic crop. A special feature that was discovered by chance in the Azores is that by burning dry vegetation and causing thick smoke all pineapples will mature at the same time, making it convenient to start a new two-year crop growing cycle again.

Water management in the historic greenhouses also concerns the preservation of soil moisture. The pineapples are grown on a substratum of sawdust and pittosporum leaves. When the leaves of pittosporum (a tree originally introduced to the islands as a wind-break for the orange orchards) decompose, they release iron which adds to the taste and colour of the pineapple. The decomposition also adds extra mild heat, which helps to raise the temperature in the greenhouse. The mixture of the leaves and sawdust is also effective in retaining soil moisture. This practice is old and used to be done with ferns, moss and heather, but these days forest are protected. 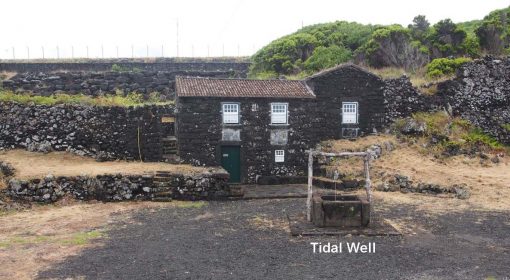 Azores: A World Heritage of Creative Water Use