Whilst the attention in Middle East water conflicts has been on water from rivers, we may have lost the water ‘beneath our feet’ and with it the strong basis for future well-being and security in this region.

According to California University Hydrological Modeling Department, the Euphrates and Tigris river basins have been losing huge quantities of ground water reserve – with the maximum anomaly right at the border point between Syria, Turkey and Iraq. The video below shows the groundwater depletion in Middle East via GRACE (Gravity Recovery and Climate Experiment) model, which uses deviation in the gravity rotations to assess the weightage lost because of groundwater extraction. The impact of uncontrolled groundwater extraction, poor irrigation methods and a lack of water management in the area and the uncontrolled use of groundwater has left a huge ‘hole’ in the groundwater reserves in Turkey, Iraq and Syria.

The Euphrates and Tigris originate in the Eastern part of Turkey and famously flow to Iraq and Syria. There have been long standing problems between the Turkish, Iraqi and Syrian governments on the water releases from these two vital rivers. Since the building of Keban dam (1965-1973) by Turkey water conflicts emerged between the three countries that once formed ‘the cradle of civilization.’ To secure its own resources the Syrian government responded by building the Tabqa dam between 1968-1973, but that dam created conflict between Iraq and Syria. At the time the Saudi government prevented potential war between these countries.

The first trilateral talks started with Joint Technical Committee meetings in 1983, yet despite protests by neighboring countries the Turkish government constructed the Ataturk Dam (1983-1992), which is the biggest dam in Turkey. Iraq and Syria have consistently insisted that the water releases downstream from the Ataturk Dam should be agreed upon and settled but nothing has happened. The Iraqi government even threatened the Turkish government that if less than 700 cu m/s were released to Syria, it would not renew the 1984 Security Protocol. Water conflict is the order of the day: manifesting as claims for more and transparent water releases, refusal to take part in meetings, and complaints to Arab League and western countries. With observations from GRACE satellite, it is clear that the situation is even much more precarious. With the depleting groundwater resources, the heavily disturbed region is staring down into a precipice and a future with vanished groundwater and choked surface water supplies.

Nevertheless, Turkish authorities continue to single-handedly pursue the building of dams along the two rivers. Obviously Turkey, Iraq and Syria urgently need to organize an action plan in order to manage water from the Tigris and Euphrates catchments and in general make huge progress in more efficient water use and conjunctive water resource management. Between the three countries there are several agreements but none of these seem valid or effective. This holds the future of Iraq and Syria in suspension. That’s why developing hydropower in the Middle East can be dangerous. Instead of constructing new dams in Anatolia, Turkish government should assist neighbor countries to manage the Euphrates and Tigris river basins together and share equally, otherwise there might be trouble in the neighborhood.

Currently Syria and Iraq are in severe turmoil and nobody knows when and how this will end. Sectarian conflict, corrupt politicians, lack of transparency in governance, lack of education, poverty, tribal lifestyle and sometimes naïve competition to bring “Democracy” to the region has created the worst possible logjam.

The deep crisis in Syria and in Iraq definitely will affect Turkey, currently the single stable factor in the region – if not in short term then definitely in the medium term. Neither U.S drones nor any other useless sophisticated weapons will solve the current turmoil. They may, in fact, make things worse. Therefore Turkey should help various parties in the neighboring countries to achieve ceasefires and solve problems at the table. There is a strong case to add water management to the discussion: the Middle East is drying up rapidly and its future prosperity stands on increasingly thin ground. 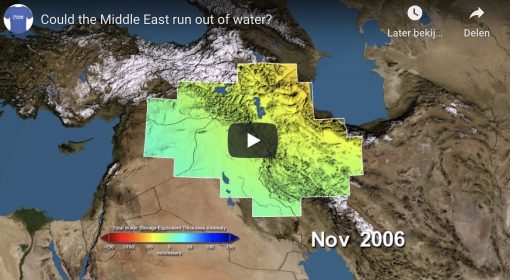