Postcard from Noord Brabant, the Netherlands:

Coming back on a  dry sunny day, we noticed how the canals were steaming. They seem to breathe water clouds all along their route.

Evaporation is a special thing. Whereas it is at the 100 degrees Celsius boiling point that all water inevitably is moved from liquid to vapor state, water turns into gas all along the temperature spectrum – at cold, moderate and hot temperatures. Water can even freeze away.

It is not just heat driving evaporation. Where water and air interface, the mixture creates a different energy state than fully liquid. Molecules escape at the water surface – one by one, layer by layer, and gradually the water body dries up. Particularly when the air is dry and not saturated, water boils cold, the process slowing down as the air gets moist.

It is this in fact this phenomena that drives the hydrological cycle – because if water would only evaporate at the boiling point, few clouds would be formed ever and all rains would remain on the ground. Water vapor is one of the powerful feedback mechanisms in the climate system. It is a greenhouse gas in itself and increase in humidity produces additional warming, thus accelerating climate change. We may end up with an atmosphere that is more humid and that has less capacity to store vapor . This is off-loaded with hurricanes and rainstorms. 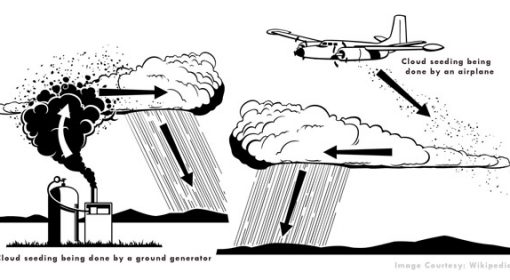