Darawat Dam is a concrete gravity dam developed across the Nai (spate) Baran River near Village of Jhangri in Jamshoro district of Sindh, Pakistan. It took three years for construction from March 2010 to March 2013. The dam is 250 metres (820 ft) in length and 43 metres (141 ft) in height, with a design storage capacity of about 150 million cubic metres (120,000 acre ft) of water which can potentially help irrigate 10,000 hectares (25,000 acres) of land.

Before construction of Darawat dam across the Baran spate (Fig.1-4), the groundwater aquifers and their recharge rate were sufficient for agriculture and domestic activities. Agriculture was done mostly through spate irrigation systems.

Subsequently, the groundwater aquifers have started to dry in the downstream of Nai Baran (Spate). The impact on the shallow aquifer zone has been evident over the past two years, as shown in the Fig 6. This has had adverse effects on the agricultural production and socio-economic conditions of the stakeholders, especially in the areas that continue to rely on the spate flow and that do not benefit from the newly managed irrigation flows, especially since the canals to bring waters from the new reservoir have not yet been completed.

Upstream of spate Baran at Darawat Dam location, during the wet period before construction of the dam Upstream view of the dam reservoir

The groundwater aquifers are also recharging through rainfall, through some scattered natural depressions. The physiography of the region is unique. However, in these types of regions, small ponds are designed for use by communities for agriculture, during periods when floods are at their lowest level. More of these ponds can be developed to boost the ecosystem, support agriculture, recharge aquifers, and to boost socio-economic activities in general.

The downstream area is in bad health due to shrinking aquifers and degrading groundwater quality, which in turn is due to lack of runoff and erratic rains. Since the dam construction, downstream communities simply haven’t had the option to tap into the runoff water; they are left completely at the mercy of the rains. People have started digging wells as deep as they can to ensure they have access to water. Solar pumps are being used to utilize such deep groundwater.

The dam itself has not started functioning as per plan, as evident by the delay in its filling up.  This can be attributed to less than expected rainfall volumes, but also points to an overestimation by hydrological studies that preceded the construction.

As explained earlier, the downstream area has already been cut off from the runoff, and has had to face many negative effects as a result. To remedy these effects, an integrated approach needs to be taken, to strengthen and enhance the periphery bunds to capture the downpouring rainfall and runoff from their adjoining parts of the barren lands.

The author has worked as an engineer for both private firms as well as government (Pakistan Agricultural Research Council). Most of the work has been in spate irrigation systems and the use of groundwater. In 2020 the author was awarded with a PhD at USPCAS-W/MUET-Jamshoro based on his research into ‘Hydrologic assessment of Khirthar National Range using remote sensing and modelling approach’. An overview of his published papers can be accessed through Research Gate. 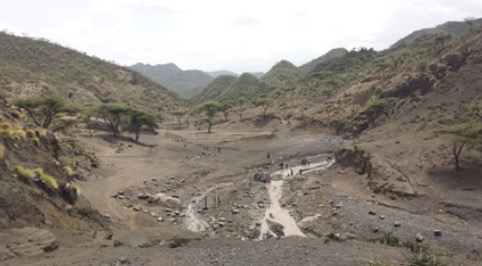