They go largely unobserved and unattended. In view of the climate change that is with us today, this is a huge missed opportunity: microclimates.

As long ago as 1949, Wolfe, Wareham and Scofield[1], meticulously describing the microclimate in the small Neotoma valley in Central Ohio, observed there is much attention for predictions and trends of macroclimate, but far less understanding of how this translates in weather at local level.  The same holds true today. Climate science has a large interest in ‘average weather’. There is an obsession with predicting larger climate trends: regional long-term patterns of rainfall, temperature peaks and averages. How this pans out locally in time and space is less understood.

Microclimates are the wonderful local interplays between factors such as soil temperature, air temperature, wind directions, soil moisture and air humidity – affected by day-night effects and seasonal effects.  They are determined by the particular landscape, soil conditions, vegetation and land use and water retention. Basically they are where meteorology lands on earth and where a dynamic interaction of forces – local heat exchanges, capillary rise over seasons, moisture retention – determine, the moisture available to the different ecosystems, the presence of dew and frost, the actual temperatures for plant growth, the vigour of soil biotic life and capacity to fixate nitrogen and the occurrence of pests and diseases. The effect of microclimate may either buffer against climate change or may amplify its effects, be it temperature peaks, droughts, more irregular or later rainfall.  In the info graphic below this mosaic of interactions is visualized: Furthermore, microclimates can be influenced and managed. There are several interventions that can effect the microclimate and hence the ability of an area to cope with and even make beneficial use of the larger climate change.

The first important intervention is to better retain water at landscape level by water harvesting, by water spreading and by erosion and drainage control. This increases the soil moisture available in a landscape. When there is more moisture in a landscape it will even out temperature peaks and lows, both in the air and the soil at different depths. It will have an effect on dew formation and the risk of night frost. Moreover secure soil moisture is a big boost to the ability of soil bacteria to fixate nitrogen and add to the overall fertility of the landscape.

Another intervention is regreening. Vegetation affects (like soil moisture) how much heat is absorbed in an area and how much is radiated. It affects the circulation of air temperature at different layers and the speed and direction of winds and the movement of dust particles among others.  Vegetation canopy can retain moisture. The presence of small forests in open landscape can create local winds.

A good example is the Tigray and Amhara in Ethiopia (see picture above) where intense development of the landscape under the watershed movement caused so much change, with shallow groundwater tables coming up, moisture secured and vegetation boosted.  Agricultural productivity jumped not only the effect of secured moisture but probably also of gentler microclimates and higher soil nitrogen availability. Understanding the microclimate is an essential part of managing ecosystem. It is also a call for intensive change – making not isolated interventions but having a critical sum of measures that creates a systematic change of microclimates at landscape level.

Moreover, there are different strategies conceivable in intensive watershed management and regreening – the type of water harvesting being done (run-off storage or water spreading) or the type of vegetation promoted – all having a different impact on the micro-climate. The management of microclimate is a powerful, but not well understood frontier to smoothen out the impacts of climate change and at the same time create more resilience by more stable agricultural ecosystems. 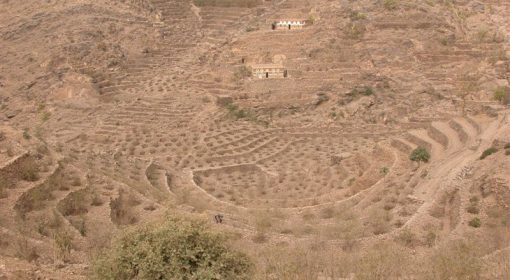 The Power of Dew