It is the world’s largest irrigation system, also called ‘the Indus Food Machine’-  14 Million hectares of irrigated land in Pakistan, distributed over more than 40 interconnected canals commands.  This mega-system produces, among others (in 2012), 9 million tons of rice (including the famous ‘basmati’ variety), 23 millions tons of wheat and 10 million bales of cotton.

There are two things that are very remarkable about this enormous irrigation system. Its first amazing feature is that there are no clear water rights. Water allocations exist on paper but are outdated. They were made long before the construction of the Tarbela dam that was finalized almost forty years ago in 1974. The Tarbela Dam regulated the flows of the Indus river, storing the abundant water in the monsoon season and releasing it during the dry ‘rabi’ season.  This evens out peaks between the wet and dry periods and makes more water effectively available.  The obvious thing to do next would have been the adjustment of water allocations both at the level of the main canals and at the level of the individual fields. This, however, never happened. As a result, water allocations became  ‘fuzzy’ – based on a situation that no longer exists.  In many canal commands there is no single register and sometimes two or three lists of farmer water entitlements circulate. It leaves a large room for ‘discretion’ by the engineers and linesmen operating systems: if a field engineer announces that water will be provided as per the original rights, it sends shivers down farmers’ spines. Interestingly, the second amazing feature of the Indus surface irrigation system is that more than half of the water at farm gate now comes from groundwater – provided by a million or more shallow tubewells, located all over the canal system (see picture).  These shallow tubewells have done a lot to improve the reliability of irrigation as they can be switched on on demand, ensuring that the farmer is less dependent on either awkwardly timed (or in other cases erratically available) surface water. Of course, eventually its all the same water: the shallow aquifers are fed by excess surface water seeping in from canals and fields. The development of the nearly one million private shallow tubewells in the last 30 years has created a magnificent buffer that has sustained a near doubling of the number of crops grown annually.  The use of groundwater is especially high in areas where the groundwater is naturally fresh. However, even in areas with saline groundwater farmer tubewell operations supplement surface water.  Tushaar Shah in his phenomenal book ‘Taming the Anarchy’ has called this ‘the conjunctive reality’. This intense use of groundwater resulted in a remarkable feat during the 1998-2002 drought years. In this period the releases from the Tarbela dam to the canal system were 20% less. But surprisingly, crop production in the Indus Food Machine did not go down. In fact, it went up slightly.  The reason was a more judicious use of water, especially a much better balancing of the use of surface water and groundwater. The most spectacular place was Sindh Province at the tail end of the Indus system. For historical reasons, surface water allocations per hectare in Sindh are much higher than in other parts of the country: whereas average supplies nationally are around 700 mm, in Sindh they are often 50-150% higher. As a matter of fact, actual water allowances in Sindh are too high.  One reason is that in the distant past, many of Sindh’s canals were earmarked as ‘semi-perennial’. What this meant was that in the pre-Tarbela regulation days these semi-perennial canals received high flows during the wet season but were closed off in the dry season. After the regulation of the flow this changed and the ‘semi-perennial’ canal commands also received flows during the dry period. This was not necessarily a good thing and ‘water logging’ (the presence of water in the root zone of the crop) increased in Sindh.  This has knocked down crop yields. Additionally, the moist environment and standing water also increases the incidence of diseases such as malaria or (for livestock) liver fluke.  The wise thing to do in Sindh would have been to expand the area under irrigation after more and better-regulated flows became available. Instead the additional water was used to drown oneself. In the remarkable 1998-2002 drought period, groundwater use increased (see picture), surface supplies reduced and the area suffering from water logging dropped from 2 million hectares (40% of the total irrigated area in Sindh) to 250,000 hectares! Unfortunately this remarkable period did not serve as an eye-opener and water deliveries were back to their dreadful ‘normal’ soon thereafter. As a result, water productivity across South Asia differs considerably: whereas one cubic meter of water produces 1.3 kg of wheat in North India, it produces 1 kg of wheat in Pakistan’s Punjab province and 0.7 kg in Sindh Province.

The reason for these impasses are anybody’s guess – but one overriding reason is the fact there is no water management to speak of in the world’s largest irrigation system. Basically the system is run as a utility with a small number of professionals (one executive engineer is typically in charge of an area of 200 to 300,000 hectares) primarily concerned about how water is delivered where and to whom – dealing with a lot of political interference in the process. Another reason is that Sindh Province has locked itself in an awkward discourse. Being the tail-ender, it always claims its water is stolen upstream. Street protests making this political point are rampant. The fact of the matter, however, is that water allocations to Sindh are very high for the land area they serve. Also, often more water is diverted at the main barrages than officially recorded and acknowledged. The sum total is that there is too much unnecessary water logging and that the opportunities of adding a probably more than half a million hectares of irrigated land in Sindh is not considered.

With all the concerns around global food security, the gigantic Indus Food Machine could do a lot better. Several things would make a tremendous change: (1) settling the water allocations and (2) in the process, systematically adjusting the surface water allocations to a canal command with the use of groundwater in a canal command- channelling more surface water where there is already intense use of groundwater and reducing flows to stimulate more pumping in other areas (limited to what groundwater quality allows).

The story above is not unique to the Indus system in Pakistan. It applies to other mega-irrigation systems in South Asia as well. The Sindh story, for instance, is very similar to what happened in the drought years in the Krishna system in Andhra Pradesh (India). Production went up, especially in the tail end systems, and drainage problems disappeared. Again, after the drought was over, the water deliveries went back to their dysfunctional suboptimal status quo.

More than 30 years ago, Robert Chambers described water management in mega canal systems (at least in South Asia) as ‘a series of blind spots’.  This remains true today and several of the largest irrigation systems are heavily underperforming. They could serve a much larger area; produce more per hectare and per unit of water; contribute to healthier environments and help restore the confidence of common people in government and governance. Despite all the concerns around global water scarcity, the scope for improving mega irrigation in South Asia remains largely unfulfilled. 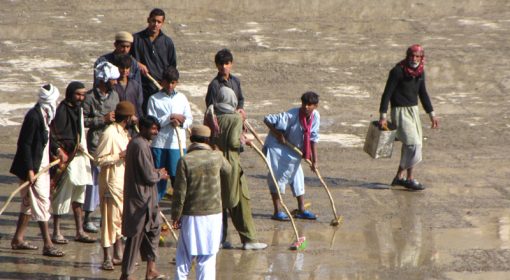