Here is Harla in Eastern Ethiopia and here is its ancient ficus tree – a reminder of the vegetation that once was. In the last century the area changed beyond recognition. Its steep hills were in rapid time transformed into farm land – at slopes so steep that erosion was a given. Soil rapidly washed away and the entire area lost its thick fertile outer skin, as in so many parts of the world.

The magnificent Harla ficus tree lived through all of it though. It kept standing erect but more and more soil disappeared – exposing its elaborate root system. In due time the tree was left standing on its roots rather than resting on the land.

Here is a picture from 2007 and then one from 2017. Soil conservation works were done in the area in the last fifteen years – they could slow down the erosion but not bring it to a halt. Even half a meter more of the roots became exposed in this last decade – the tree having no choice but to become ever higher perched on its roots. The stones trapped by the root systems are still visible because they can not “melt down” as the soil does. 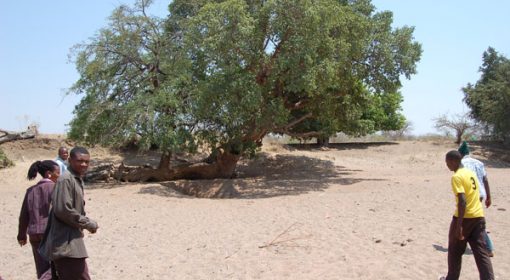