The use of video in agriculture and rural development is not new. Anyone with any interest in the sector would have seen some fine productions shot on film or VHS. Making videos used to be elaborate and expensive, and only the biggest organisations could afford it. This limited their scope and numbers, especially in developing countries. Nevertheless, many ‘D‘evelopment agencies invested in productions to document techniques, good practices and bad examples relevant to agriculture in developing countries. Given the natural advantages of video as a medium, they captured qualitative information in a way that was not possible with other forms of documentation. So for anyone who could access these videos, they made for a great repository of rich information and data. The power of the visual medium was also realised, and utilised, for training purposes.

Click here to watch some of the oldest videos
on TheWaterChannel

However, for a long time, the scope of sharing these videos was rather limited. These videos existed on physical tapes. Television sets and playback devices were expensive. The reach of broadcast media was limited, especially in developing countries.

Over the years, this barrier has been breached. Digital technology and the world wide web have made shooting, editing and sharing videos possible for anyone who’s interested. And for cheap, too. The video camera is no longer a bulky, expensive gizmo that needs trained operators. It is now small, cheap and seamlessly integrated with mobile phones, computers and most other media devices.

As expected, this has led to an explosion in the number of videos being made and how far they are being shared. This has had implications for everyone, as also for the agricultural sector. Much more information is being documented and much more widely shared than ever before. Also, the sources of knowledge creation now extend beyond the privileged few. This has the potential to provide a lot more farmers– big and small– access to information they can use to increase their productivity.

Video, as a tool, is now in a lot more hands than ever before. This has made it possible for many to use it and innovate. Of late, many have explored the possibilities that video offers, beyond conventional documentation, dissemination and as training material. Here are a few interesting examples:

1) Agriculture Extension: Digital Green, India, has developed a video-based knowledge environment for small-scale farmers. With the participation of farming communities and government agencies, they produce videos demonstrating/ analysing agricultural techniques and practices. These videos are then disseminated among farmers through physical resource centres in rural areas, and through screenings mediated by agricultural extension workers. The relevant government and non-government agencies are linked to the process to support farmers in adopting new techniques/ practices.

Working in India since 2006, Digital Green has developed a repository of 2180 videos, held 90,975 screenings and has reached 97,667 farmers. They claim that their model “… has been found to be 10 times as effective, per dollar spent, in converting farmers to better farming practices than classical agricultures to agriculture extension.” (More info)

IICD’s AGRECOLprogramme in Bolivia is an interesting variation of the approach. It uses video (and other visual, audio and print media) to help farmers record and share their experiences related to ecological agriculture and natural resource management, with other farming communities. The project was conceived in response to the limitations of mass media in reaching rural communities and addressing issues relevant to them.

2) Research: InsightShare is engaged in a number of action research projects designed around a framework of participatory video. This methodology involves members of the target group in the research process. They use videos to capture answers to the research questions. This adds value to existing methodologies in the following ways:

This methodology was used to develop the key research requirements for natural resource management in the Nepalese Himalayas, by the European-Commission-funded project NORMA (More info).

In a similar exercise, communities in the Pangani River Basin (Tanzania) used video to document environmental challenges and ideas for solutions, to effects of Climate Change and rising tensions over scarce water resources. The exercise was part of a basin management project implemented by IUCN.

3) Monitoring and Evaluation: Two common problems associated with M&E exercises is that they (a) are poorly understood by the stakeholders and (b) fail to inform and involve them in the process. In projects to do with agriculture and rural development, this disconnect is often because the target group and implementers come from different cultural and social spheres.

When incorporated into M&E exercises, participatory video could prove to be a component that brings the two together. It provides scope and rationale for the target group to get involved in the process. Besides, it offers advantages with respect to data collection as it does in the case of research (see above).

This idea has been explored, among others, by The International Fund for Agricultural Development. Starting 2004-05, the fund trained staff working on many of its projects in Sri Lanka and Laos.

As video becomes more and more accessible, people around the world continue to devise innovative uses to suit their specific needs. When it comes to adapting it for the poor and marginalised, the themes of “participation” and “empowerment” appear prominently. In all the interventions mentioned here, it is deemed important that farmers take part in producing videos and, effectively, contribute to the body of knowledge that informs the understanding of what they do. This goes quite some way towards empowering the farmers, and improving the effectiveness of interventions that aim to further agricultural development/ food security.

Numerous ideas, examples and perspectives on the use of videos are emerging every day. For sure, this space misses many of them. We encourage you to share what you know in the Comments section below. 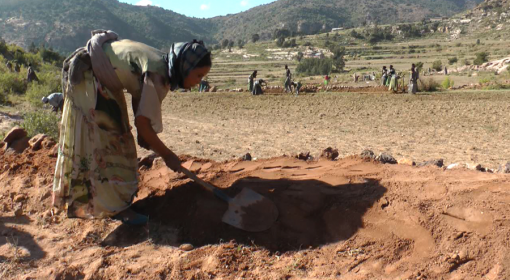