This documentary film is a medium of information and awareness for various stakeholders (policy makers, civil society, populations, technical and financial partners) about the many challenges and opportunities related to large dams in West Africa. These challenges were addressed through four sites in the region: Sélingué in Mali, Bagre in Burkina Faso, Diama in Senegal and Kandadji (planned) in Niger.

This film is produced under the project “Regional Dialogue on major water infrastructure in West Africa” launched in 2008 by ECOWAS through its Water Resources Coordination Centre (CCWR). In deciding to support ECOWAS in its approach, IUCN’s goal is to promote environmentally sustainable and socially equitable water resources for West Africa by facilitating the extension of dialogue to non-state actors, civil society organizations and users.
The film is used to disseminate recommendation of the regional consultation between stakeholders to promote good practices in designing, constructing and operating large water infrastructure. 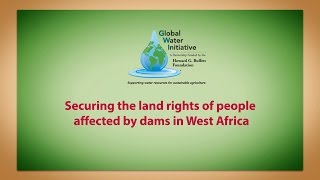