The Lingqu Canal is located in Xing’an County, near Guilin, in the northeastern corner of Guangxi Province, China. It connects the Xiang River (which flows north, toward the Yangtze) with the Lijiang (which flows south into the Gui River), which in its turn continues toward the Xijiang), and thus is part of a historical waterway between the Yangtze and the Pearl River Delta.

In 214 BC, Qin Shi Huang, the First Emperor of the Qin Dynasty (221-206 B.C.), ordered the construction of a canal connecting the Xiang River and the Lijiang, in order to attack the nearby southern country Baiyue. It is one of the three big water conservation projects of ancient China and is the oldest contour canal in the world. Its length reaches 36.4 km and was installed with thirty-six canal lock gates. The architect who designed the canal was Shi Lu.

The canal has been placed on the UNESCO World Heritage Sites Tentative List.

This video provides an overview of the canal and an insight into its mechanics. 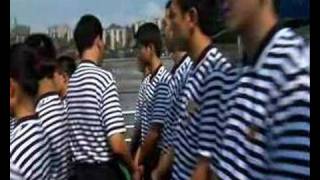 Up the Yangtze trailer