Greenpeace International investigations have revealed dumping of industrial waste water from a few Industrial zones located in China’s most important textile manufacturing base. The organization has been always worried about China’s greatest success—it phenomenal economic growth—, wich is the main forces behind its environmental problems.

This documentary released on World Water Day 2013 shows the extreme water and land pollution caused by the wastewater of the textile industry in Hangzhou, China. It includes soundbites of a dye factory worker and interviews with local activists Dongying Wei and Guantong Shao who have been investigating environmental pollution for over a decade. They have reported their findings to the government officials and more than one thousand villagers have signed up to show their support. Despite their efforts, nothing has changed and wastewater discharges from various industries continue to pollute their land and rivers. 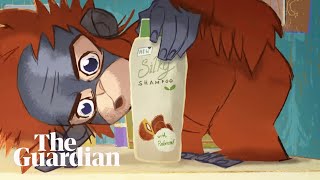 The Greenpeace film Iceland wanted to run as its Christmas advert