Among other basic needs, access to safe drinking water and sanitation together are vital for people to achieve their full potential. Additionally, availability and proper management of water are crucial for agriculture which is a key source of food and income to billions in developing countries.

In this context it is important to talk about disability. Disability is not only an individual attribute, but a situation arising out of a constant interaction between the person and the environment. Therefore, any actions/interventions should not just focus on medical and physical rehabilitation, but also social and physical barriers that people with disabilities encounter in daily lives.

People with disabilities (PWDs) are already a marginalised group across societies, facing exclusion, stigma (social barriers), physical constraints (environmental barriers), and discriminatory legislation (institutional barriers). This makes them unable to participate in all spheres of the society. Water management in agriculture is part of this reality.

Food security and water management have been recognised as two pillars capable of sustaining livelihoods and providing food security. However, it is rare to find PWDs in Water Users’ Associations. It is rare that their fields are connected to irrigation infrastructure. One can hardly find instances of PWDs as parts of flood prevention plans or climate change adaptation measures.

The UN Convention on the Rights of Persons with disabilities (UNCRPD) states clearly in two of its articles about the importance of including PWDs in international cooperation efforts (Article 32), and in management of risk and humanitarian emergency (Article 11). The reality is a far cry from that. This has repercussions on economic growth, livelihoods and sustainable development at a global level.

Inclusion in development efforts is a fundamental right. To secure it, it is necessary to ensure (i) participation of PWDs in decisions that affect them; (ii) accessibility to environmental, institutional and social spheres of the society by tackling existing barriers; and (iii) involvement of PWDs in policies, systems and practices of organisations.

Research has shown that inclusion of PWDs (2012, Brujis et al) in regular programmes and activities often doesn’t require many additional efforts and resources but an inclusionary approach that involves them in all spheres of the project cycle, from stakeholder analysis to need assessment to definition of project activities.

How can PWDs’ integration and inclusion in the water sector be realised? How can their participation in key institutions (such as Water Users’ Associations) and decision making processes be ensured? Good examples do exist and they need to be up-scaled.

In Adis Hywot and Tesfaye Hiwots, two villages 20km from Doni, Ethiopia, two Water Users’ Associations managed by PWDs are in place. They enjoy support by government authorities at the national, regional and local levels.  The involvement of PWDs in agricultural water management has been promoted since the 1960s by Swedish development cooperation agency Sida the Swedish cooperation together with the Ethiopia-based Alert group of hospitals. (After Sida’s withdrawal in the early 1990s, the Oromia Water and Mine Bureau took over.)

The irrigation system was already in place for some time when PWDs started ‘migrating’ to the area. They were initially employed as government officials but then also allocated plots of land to cultivate and subsist on. Later on, with active Swedish support, and active PWD association was created which increased willingness among PWDs to participate in agriculture and WUAs. Ownership of land was a big factor in creating this willingness.

In 2003, the main canal was diverted to irrigate an additional 40 hectares of land. Subsequently, part of the land was allocated to PWDs—76 in all, out of which 22 were women. (Some of the elderly among this group have since then been replaced by their relatives.)

These members are quite actively involved in agriculture. They carry out all the necessary activities. When they cannot, they hire daily labourers. For example, 150 PWDs who are part of the WUA in the Adis Hyowot irrigation scheme suffer from multiple physical disabilities (elderly; multiple physical disabilities; loss of a vital body part; inability to use vital body part) and they do rent out their land to daily labour. However, they play a crucial role in water management in and around the farms. They participate in meetings, vote in elections, see to it that all users confirm to rules and report any problems to the Woreda office (local government department).

What makes these WUAs inclusive?

It might be useful to identify specific activities that are physically relatively less demanding. Such activities would be useful as ways to involve PWDs in water management and agriculture in general 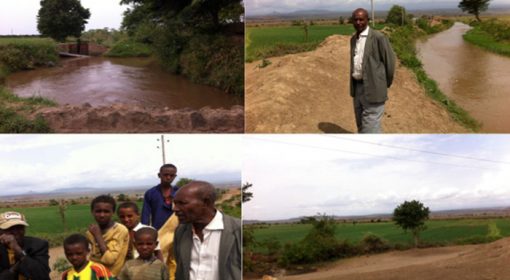