Whereas pressurized irrigation systems- such as drip and sprinklers- are widely promoted to save water, their largest benefit may lie not in the water saving, but in the higher production they make possible. While this is not new (the so-called Comprehensive Assessment estimated already that micro-irrigation systems achieve 5-56% higher yield), it often goes unnoticed.

An outstanding example of this is a new activity undertaken in the mountain county of Pingshun in Shanxi Province (with the help of the 0188-PRC Grant Climate Change Adaptation through Groundwater Management).  This area is the ‘home’ of prickly ash (zanthoxylum) – a thorny scrub usually grown for its distinctive peppers that are the main ingredient in the famously hot Sichuan dishes. In Pingshun, however, prickly ash is grown not for its pepper but for its young tender leaves. This is a niche product in China, sold as pickle by a local manufacturer and also as a fresh delicacy in the growing urban markets.

Prickly ash got a major boost in Pingshun six years ago when the local government introduced the use of mesh tents. This helped to largely control the problem of aphids (lice), reduced the use of pesticide and improved the quality of the product.

A new activity introduced this year is the use of micro-sprinklers, that are suspended in the mesh tents. The suspended micro-sprinklers wash down the remaining aphids and keep the soils from getting too wet. They are also connected to small tanks that make it possible to add small doses of fertilizer or pesticide.  As a result less fertilizer, pesticide and water (40%) is used and a higher yield with a cleaner product is achieved (20%  more) with less labour. The last point is important as many farmers in China are 55 years or older.

There is a financial cost to the micro-sprinkler system, but where good water is available the payback is less than a year. The strength of the system is not water saving as such, but also energy saving (less fertilizer and pumping) and creating a controlled micro-environment that allows a higher production.
(Watch related video: Controlled Micro-Irrigation: For saving water and improving yield)

This is not an isolated example: in Andhra Pradesh (India) sprinkler systems are very popular in groundnut cultivation because they bring down the risks of pests that come from overly moist soils. In Balochistan (Pakistan), controlled irrigation became popular in apple orchards as it reduced the early fall of blossom and brought more fruits at harvest time. In a farmers’ review of a large water conservation project in Yemen, 76% of farmers mentioned that crop production had gone up with 15% or more.

There has been a debate that in micro-irrigation water savings may be deceptive. The argument is that with the efficient systems, there is less water loss but that a large part of that loss otherwise would have been recovered by groundwater pumping and that efficient irrigation encourages the overstretching of irrigated areas instead. It is also said that, in sprinkler systems, a larger fraction of water disappears into the atmosphere. Whatever the merit of that debate, the big benefit of micro-irrigation is the better agronomy it supports and hence the higher water productivity it makes possible.  This means more yields. This is what matters more to the farmers than water saving, and goes a long way to explain the popularity of micro-irrigation in many areas. 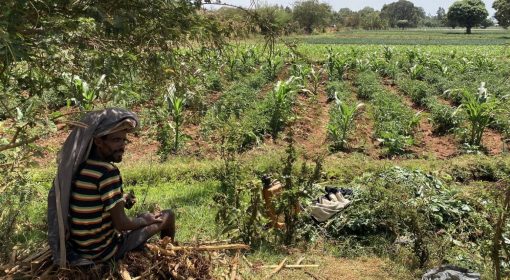