The term ‘land grabbing’ has now become common use. It concerns dubious land acquisitions accelerated after the 2007-08 world food price crisis. It is typically associated with large scale land transactions to corporates operating in the export business, but this is only part of the picture. There is land grabbing going on at different levels – and in many countries, the politically well connected have in recent years obtained plum pieces of land, often at the cost of small farmers or fishermen.

We came across this in Pakistan, where mangroves are brutally converted into residential areas and urban infrastructure by powerful interests, or more subtly in Vietnam where under the guise of eco-parks the most beautiful land is grabbed from .

Another large land grabber is often the army and the military corporations and businesses that sustain it. This can be seen in the Pakistan example, with its Defence Housing Authority involved in most of the deals related to the mangroves example mentioned above. In the central drylands of Sudan, a number of large-scale, mechanized farms have been set up over the years that are guarded by the national army. Trespassers that they keep out include small farmers and pastoralists following their centuries-old migration routes.

Much of this land grabbing is in essence a rush to use and control increasingly scarce water resources. Saudi Arabia does not lack land area but water availability, and that is what has led to companies based in the country acquiring huge swathes of farmland abroad to produce food and shipping it back home. It is notable that most of the countries heading the global rush for farmland also have a high water stress index.

There is even more to water grabbing. Development of dams is often done with ignorance and disrespect to downstream uses. In spite of the all the work on the World Commission on Dams nothing has really changed. Downstream communities depending on massively productive flood plains are often ignored and no serious effort exists of keeping the floodplains productive if a dam is constructed.

And then there is also the almost purposeful denial of access to people to there longstanding water rights. This has happened in the Palestine Territories where the immense Wall built by Israel systematically has separated Palestinian farmers from their land and wells.

Another driver of water grabbing emerges from international financial markets. As resources like land and water get more and more scarce, markets are getting more and more interested in their value and investment potential. This has led to a steady rise in speculative investment with little focus on productive use. So, at the end of the day, we are left with more land and water acquired by international capital, more smallholders losing resources they once owned, less productive use and depletion of these resources in the long run (More).

It is amazing that, despite their sheer size,  water grab deals falls into grey areas of legality, there is a general lack of transparency and good-quality data related to them. Most of the analysis is based on media articles and contracts that may or may not be real. We encourage you to alert us and others to such cases.

Addressing land/water grabs require interventions that strengthen legal safeguards, governance, citizenship and accountability. Since sovereign governments are often complicit, intervening can hardly be straightforward. However, a start can be made by bringing to light more and more views, evidence and stories. Here are some videos that do:

Life, Land and Justice in Uganda: In Kalangala, Uganda, John Muniishya woke up one day to find bulldozers clearing his land to plant oil palms. John and his community have preserved their forests and lands for generations. Now their way of life is at risk.

The Value of Land: More on how oil palm plantations in Uganda have acquired large tracts of land used by rural communities, and have brought their livelihoods to an abrupt halt. The three-part video series tells stories of a mother of 9 who cannot grow her own food on her small plot of land anymore, a small businessman who used to make charcoal and sells it to farmers in his community, and a 65-year granny whose access to fuelwood was abruptly cut off.

Killerbean: A documentary that shows how meat consumption in Europe is linked to large-scale land grab, deforestation  and agrochemical pollution in the Brazilian Amazon.

Soy Farming and Land Grab in the Brazilian Amazon: This short interview details further the ‘Killerbean’ story, through the work and experiences of Dr, Sergio Sauer,(National Rapporteur for Human Rights in Land, Territory and Food, Brazil.

5 Ways to Re-think Land Grabs: Is the current conception of land grabs too ‘Africanized’? Does it place too much emphasis on the ‘foreign hand’ (multinational corporations/ foreign governments), while discounting the role of the state? Yes, says Dr. Jun Borras (Institute of the Social Studies, The Netherlands) , explaining also the role played by flexi-crops in the whole process.

Have you experienced or observed land-grabbing in your part of the world? Would you like to share that in words, in pictures or on video? Please use the comments section below, or email us. 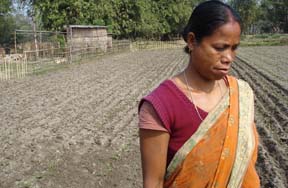 Global Land Grab: The Ongoing Struggle (and a Lost Opportunity?)