Regenerative Agriculture (RA) is built around the principles and practices that seek to promote healthier soil and water, promote biodiversity and restore ecosystems. Replacing traditional farming by RA is gaining its importance specially to protect, manage and restore nature. Various studies have shed light on the criticality to revitalize soil and the hydrology of farm landscapes to mitigate the effects of climate change and to sustain agriculture production systems.

The case provides a narrative on the adoption of regenerative farming by a large number of smallholder farmers, especially women, in the Poreyahat block of Godda district. The case outlines the key steps and the main drivers to facilitate practice adoption among farmers. The case narrates the roles of the Indian NGO; PRADAN, engagement of major stakeholders, challenges faced, and key learnings and reflections.

Satbandha is a village in Poreyahat block with predominance of ST households. There are 243 households having 1187 individuals. The village is fairly remote; situated at a distance of 12 km from the block headquarters. The village economy is based on agriculture, livestock, wage earning and rearing Tasar silkworm. The village has a total agricultural land measuring 218 Acres. The average annual household income is in the range of Rs. 60,000 to 70,000, with about half of the income coming from wages earned locally from MGNREGS and income through migration.

PRADAN introduced the concept of RA in the year 2019. It started with concept sharing in SHG meetings and setting up small demonstrations in the village. A farmer named Jewel Murmu showed interest in adopting the use of Bio-Inputs. In the previous year (2018), his paddy crop suffered a setback as he applied chemical fertilizers in higher doses, resulting in profuse vegetative growth and very low flowering and grain formation. Jewel incurred major losses. The next year in 2019, following his discussions with PRADAN staff, Jewel dropped the practice of chemical-based inputs and used only cow dung as fertilizer and sindwar leaves (Vitex negundo, a shrub known to repel plant hoppers that spread virus in Rice plants) as pest repellant to grow paddy. He received a yield of 210 kg of paddy grains from a small plot of 4.00 decimal of land, which is equivalent to 5.25 MT of Paddy grains per Hectare; considered a very good yield.

In 2020, getting inspired by Jewel Murmu, 60 farmers took keen interests to practice chemical-free farming in paddy.

In the same year (2020), at Poreyahat block, PRADAN started engaging with SHGs and VOs to promote the knowledge and expertise of RA among local farmers, especially women. In the training, the farmers were facilitated to reflect on current farming practices and the challenges faced. Farmers have shared a common concern on the decline in soil fertility, crop yields and diminishing returns. People commonly understood the harmful effects of chemical fertilizers in farming, yet they were unable to see any substitutes to produce crops. At that stage, the training focused on sharing real experiences of farmers on practices to enhance soil fertility and crop yields. People identified a number of practices that helped in soil building, such as the use of cow dung and organic manures, cultivation of legumes, crop rotation and in-situ water harvesting. These trainings helped in defining RA principles in the local context and built discussions among farmers as to what was good for their farming in the long run. Some of the farmers showed resolve to adopt RA principles.

Coming to Satbandha, in 2020, there were 60 farmers to adopt RA practices. They collectively deployed 29 acres of land for paddy cultivation. They decided to replace 20% chemical fertilizers with higher quantities of organic manures. The result was very satisfactory. Paddy yield was sustained, thus allaying the initial fear of yield reduction among farmers. The cost of cultivation was reduced by 15 percent. The crop showed much less susceptibility to various pests.

In 2021, a total of 100 farmers had adopted RA practices in an extended area of 50 acres of land. They decided to further reduce the application of chemical inputs by 50% and applied an average of 2 MT of organic manure per Acre for paddy crops.

In 2021, the Green Transformation Pathway[1] (GTP) project was launched in Poreyahat. Building on the existing momentum, PRADAN emphasized on expanding RA practices on a wider scale, covering the block. The focus was on building awareness on advantages of RA in the short run and how it can be cost effective and more rewarding in the long run. Training events were intensified and a large number of women farmers were taken to Madhya Pradesh on exposure visits and orientation. The Poreyahat team had planned to support 6,000 farmers (all women) to grow paddy through RA. An additional 7,000 women were to cultivate an array of vegetables during kharif.

Meanwhile, seeing the increased demands for various bio-inputs, the Team had set up 9 (Nine) Bio-Resource Centres (BRCs)[2] in the Poreyahat block. Each such BRC was supposed to cater to 700 farmers. Other materials such as paddy and vegetable seeds were also organized in required quantities through the support of a block level Farmer Producers Organization (FPO).

However, due to the very poor monsoon, a large majority of farmers could not sow / transplant paddy in Poreyahat block. As per the assessment of the district agriculture office, only 26% of the paddy areas could be sown / transplanted with the crop. The remaining was left to fallow. In Satbandha, about 56 farmers (out of the planned number of 106 farmers) could cultivate paddy, following regenerative principles.

With the kharif crop facing a setback, the farmers were supported to undertake rabi (winter) crops to make use of the late monsoon showers. In Satbandha, 100 farmers are continuing with RA methods in mustard, covering a land area of 28 acres.

In October 2022, a Producers Group (PG) named Jahar Jharna Sichai Samiti, Satbandha was formed with involvement of all the women farmers of Satbandha. The PG is supported by the block level FPO named Sagenbaha Women Farmer Producer Company Limited (FPC). The need of the formation of the PG was to collectivize the farmers, develop marketing channels and benefit the farmers from economies of scale. As the PG is new, till date the FPC provided good quality seeds like paddy, mustard, chickpea and ensured end-to-end services like production support, aggregation and marketing. The members expected the FPC to streamline marketing of farm produce, both in terms of selling in bulk volume and fetching fair prices for its members. There is a need to support members to gain access to government schemes for development of productive assets such as orchards, farm implements and irrigation systems.

The farmers initially focused on organic manures only for yield increase. Later on, they realized the need for various bio-formulations required for soil building, better germination of seeds, enhanced water retention in the soil and for mitigating pest attacks. After the adoption of RA practices, they could see certain changes like improvement of soil structure. The soil has become more friable and moist and the overall texture has become smooth and heavier. There are frequent appearances of earthworms. The residual moisture in the soil for extended periods helps in supporting a second crop like mustard or lentil with little irrigation post monsoon. Farmers aimed to increase their productivity by reducing the use of chemical fertilizers and focus on making the soil more `lively’. They feel the need to develop and maintain soil microbes as their presence improves soil fertility and moisture retention.

In the past 2-years, there is a national discourse being built around organic farming / regenerative Farming or Zero Budget Natural Farming. In 2020, when the PRADAN team met the Krishi Vigyan Kendra (ICAR) and the District Agriculture Department, there was a common ground / common agenda that already existed among the stakeholders. The emphasis was on soil health and the KVK had the mandate of carrying out soil tests to prepare soil health cards of a large number of farmers. The district agri department was mandated to promote crop diversification and promotion of bio-inputs among farmers. With PRADAN joining them, they gained ready access to a large number of women SHGs and a pool of Community based extension agents (Community Service Providers- CSPs) and Agri Entrepreneurs. KVK has so far trained 22 CSPs to conduct soil collection and soil tests. 16 Agri-Entrepreneurs were trained in the preparation of Bio-Inputs and were connected to the suppliers of microbe inoculums (Azatobactor, Pseudomonas, Trichoderma etc.). The Agriculture Technology Management Agency (ATMA under the Agriculture Department) has been supporting women SHGs to prepare bio-formulations such as beejamrit, neemastra, jivamrit by organizing training and provision of vats (drums) for preparing the botanical culture.  Over 200 vats have been given to the SHGs by ATMA. Covid had restricted movements in the field. Still, by May 2022, over 250 soil tests have been conducted, the results were explained to the farmers by PRADAN staff. It is almost universal to find soils, seriously deficient in soil organic carbon (SOC). The test results further reinforced the need for paying great attention to the soil health. KVK and PRADAN team jointly conducted training of farmers for application of different bio-inputs. With the guidance of KVK and PRADAN, Agri-Entrepreneurs have started preparing bio-inputs in the BRCs.

Considering this year’s drought, the State Government has initiated a Relief Programme where a farmer household is entitled to get Rs. 3,500 per household. The District Agri Department has enlisted the names of farmer households in Poreyahat, supported by the SHG collectives. Further, in order to catch the rabi season and promote diversified crops, it was decided by the Government (the agriculture departments and KVK) to provide seeds to the farmers through the SHGs. The following shows the seeds of various crops supplied in different quantities to farmers.

During our recent discussion with the KVK, the station in-charge appeared quite hopeful of positive outcomes. According to him, the impacts of RA will be visible / perceived by the farmers after 4-5 years of adoption. In order to bring the change, the focus should not be on scale rather a persistent focus on soil health and shift in priorities will not help in sustaining the momentum. “To bring systematic changes for the sustainable development of the village, every external stakeholder should collaborate for improving the lives and livelihood of tribal communities”, said the Station In-charge, KVK, Godda.

[1] The Green Transformation Pathways (GTP) project in the Indian states of Madhya Pradesh and Jharkhand aims to create a vibrant circular rural economy based on an extensive exchange of valuable products and services, supported by strong institutions and value chains. This is done through fostering sustainable management of natural resources and regenerative agriculture practices that add to the quality of life.

[2]  PRADAN conceived the idea of setting up Bio Resource Centres (BRCs) owned and operated by Agriculture Entrepreneurs (AEs). AEs are rural youth, women and men, who are interested in building a business / enterprise that has a market in their neighbourhood. With awareness and demands for bio-inputs increasing in the area, there was a market created for various bio-formulations that could be manufactured locally with infusion of some knowledge and skills among the AEs. The Bio-inputs mostly used locally available materials. The products manufactured and sold through BRCs included vermi-compost, beejamrit and shivansh; pesticides like neemastra and agneyastra. Some of the items such as pseudomonas, trichoderma viride, mycorrhiza, rhizobium were sourced from local markets. 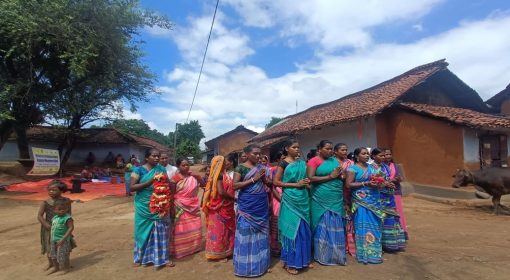 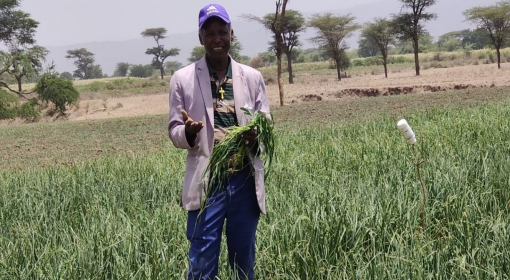 Getting a head-start: improved seeds and fertilizers in Oromia 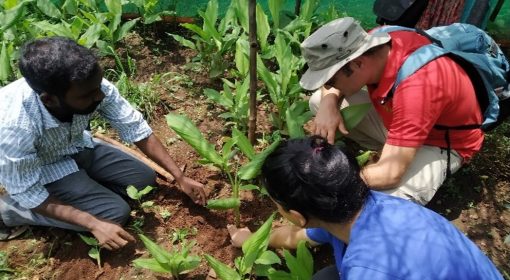