In the coastal river system of Bangladesh, land is protected by thousands of kilometers of low and fragile dikes. During normal high tide, water is close to the crest of these dikes. During spring tides that occur twice a month, the situation is nerve-wrecking in many places.

Rivers in Bangladesh shift and change by nature. They carry large amounts of sediment that is deposited in different parts of the river. Land comes up in one place and deep-water channels move to the other side of the river – coming precariously close to the very thin dikes surrounding the polders. In time, the rivers will erode the thin earthen structures, scour their base and in the end – with a small thrust –breach them.

Such widespread river erosion means that millions of people literally live on the edge. When the embankments breach, rivers make their way into densely populated farmland, swallowing land, fodder, crops, and fishponds. The most common response is to ‘retire the dikes.’

What this means is that a new embankment is made further inland, giving up the land in between and turning small land owners into a new class of landless people.

However, this is not always necessary. The tragedy is that not only are dikes fragile and exposed, but that there is no system of emergency repair. Field engineers in the Bangladesh Water Development Board have no war chest – even a small one – to control river erosion by taking basic emergency measures. In any case, funds for operation and maintenance are negligible and subject to long procedures and fiduciary regulations because of which even the scarce resources may remain unutilized at times. Field engineers simply have no way to respond in time.

Yet such measures, relatively small and low-cost, implemented in time would slow down and in some cases even halt river erosion. This may not always work but, at the very least, it buys valuable time. At best it saves people from losing their means of existence and becoming ‘victims of water governance’.

Ample study has been done on how to prepare Bangladesh for sea level rise in a medium-term future. There has been ample modeling, ample conferences and ample study-visits, but here is a basic humanitarian issue that needs to be addressed before entering such frivolousness! 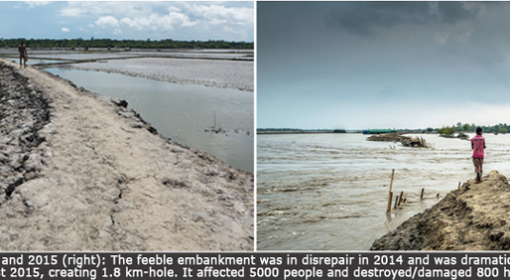