A big debate is going on in Bangladesh around ‘maladaptation.’ A paper[1] that has been doing the rounds makes the point that in the long run many of the coastal areas will not be able to ward off sea-level rise. It says that the best strategy is for people over the coming years (especially the 35 million young, economically active men) would be to leave those areas and seek employment further up North. Not good news. Ongoing efforts to improve the now thin and fragile dikes is labeled ‘maladaptation’ or, even worse, ‘palliative adaptation’.

At first sight it looks odd to condemn to the past an area which, although poor, is densely-populated and home to millions of people. At second sight it only looks more odd and even bizarre. The delta of Bangladesh is not disappearing: if anything it is still growing. The braided rivers move left and right, get silted up at one place and deepen elsewhere. On balance, new land is still added within this dynamic setting.

There seems to be a preoccupation with climate change, and it comes at the cost of addressing more immediate problems. Even within climate change, inordinate attention is given to sea level rise (+50 cm by 2050 in the worst case scenario). These may be minor problems and increasing dike crests (half a meter is not spectacular) can do the job.

The real maladaptation is elsewhere: in the inability to deal with the dynamic delta, where wide rivers triggered often by a tidal surge shift their bed-loads and start leaning towards their banks, eroding embankments. This is a regular and dramatic feature: when a breach occurs first crops and houses are destroyed, but ultimately land is taken and a new class of landless people is created.

A very insightful MSc thesis by an engineer in the Water Board[2] offers a critical scrutiny of the current system of emergency repair in Bangladesh. One would have thought that with 39 cyclones in the last fifty years and incessant shifting of rivers in its mighty delta, Bangladesh would have tuned up its emergency repair system. But that’s not the case. The current system is largely ad hoc. When an emergency appears an engineer at field level has to try to make contact with the highest authority in the Water Board, effectively five steps up in the hierarchy. The AG can give approval. In the best cases this is done in minutes but in worst cases the emergency repairs are put on the backburner. A contractor may be approached to do the work at short notice and put in his bills later– hardly a recipe for transparency.

The MSc thesis analyzed a large number of emergency repair projects implemented after hurricane Aila. It found that the delays in the emergency repairs escalate costs enormously.  Through the delay, the nature of the work itself – rather than plugging a small breach an entire river section has to be fixed. Based on a review of 79 cases the escalation of costs was 678%, 605% and 270% in the second, third and fourth year respectively (over the preceding year), basically because the damage just got bigger. And this is just the financial cost: the human misery gets bigger and bigger too.

So rather than being fixated on future sea level arise, it seems infinitely more important to develop better system in place that deals with all the challenges of braiding rivers; to find ways of dealing with emergency repairs and basic maintenance and dike inspection, buying up lands in vulnerable river strips and compensating land losses with land accreditation.

There is also a move to make dikes higher and stronger with price tags close to 1 Million USD per kilometer.  It is the ‘stronger’ part that matters a lot, to ward off the undermining of the river embankment that may be thirty meters deep and will eat away at the very basis of the land mass.

This needs to be addressed urgently, or the new and costly infrastructure may address the minor problem (sea level rise) but ignore the larger one (bank erosion). 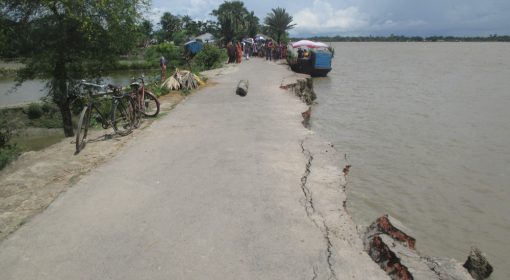 Living on the thin edge