Yemen, war, Cholera outbreaks, malnutrition, poverty, secession and locust outbreaks, these are the keywords in all the talk about Yemen currently. In times of war, people are vulnerable and exposed to harm more than any other times, and with high poverty rates, unemployment and population growth, it is getting more devastating.

Summer in Yemen is recognized by its beautiful and heavy rains that’s why the spread of many diseases is common. As is the spread of many different types of  insects. Yemen was exposed to locust outbreak annually, but this year the outbreaks were the highest recorded in damages and density. FAO and WFP have warned from the damages that affected the farmers and their production. In a country that is lacking vital services because of the war, it has been a huge challenge to provide pesticides to all farmers.

In this regard, even before the war Yemen had very modest strategies and equipment. The war has been preventing pest control measures needed to prevent devastating plagues. This year farmers have used simple techniques in fighting the outbreaks, such as simply waving them away using carton panels. 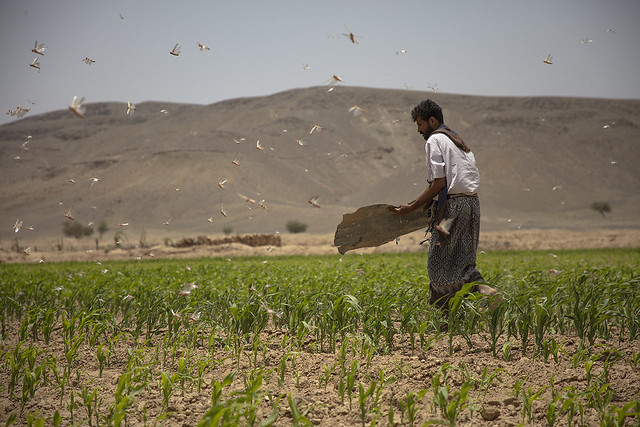 Only in some parts of Yemen the ministry of Agriculture & Irrigation can intervene and help the farmers. It’s known that the local crops production is limited so any damage that occur due to natural hazards including the locust infestations will affect the food security situation of the poor, especially those in rural areas whose livelihoods are entirely dependent on agriculture.

Yemenis have turned the crisis into an opportunity, how?

People in Yemen are known with their love to eat different locust cuisines, some like it boiled or fried or even grilled. A nutritional alternative was found for people who believe that locust contains many valuable nutritious ingredients. People have started to collect and eat them. Some have even turned it into a business– collecting them in plastic bottles and selling them in central markets besides the vegetables and meat. Locusts are kept in plastic bottles

Locusts in the initial outbreak were grey (their natural colour). Since then their tint has been changing. The last outbreak was that of pink-coloured locusts. All along, people have been eating the locusts, without fear.

Recently, there was a case of a bottle of 10 locusts being stolen. Such a bottle costs 750 YER, which is a big deal for many people.

So these days, Yemenis wait for locusts with a mixture of fear and excitement. They wish it was somehow possible to procure locusts without collateral damage to crops.

Maybe in the future Yemenis will innovate a way to store the locust and preserve their unique cuisine for the whole year, and this will be a way to survive and start a new business. Perhaps the solution lies in improved prediction of outbreaks, so farmers are better prepared—to limit the losses and, at the same time, harness locusts profitably. 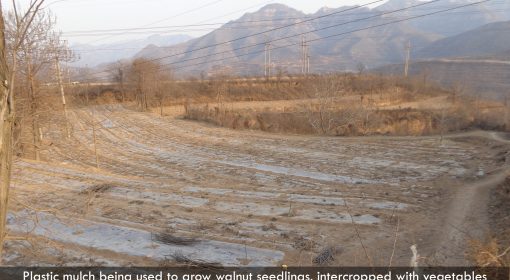