Posted by Madiha Al-Junaid (with inputs from Brett Scott)
September 10, 2015 Summer, the season of generous skies which is now over, was hoped to bring much needed rain to war-torn, water-scarce Yemen. We’ve grown accustomed to the continuous heavy rains that wash the streets and irrigate the lands around the country.

This year, however, rain has been a shy guest. The dryness is unbearable, the sun is burning hot midday.

Furthermore, a sand storm that erupted in Saudi Arabia reached the Yemeni border and covered many Yemeni cities and villages in a layer, making it difficult for locals and their livestock to breathe.

Many farmers are finding the scarce rain difficult to cope with. Their crops have longingly awaited rainfall for months now. Most of the agricultural crops in Yemen are planted and irrigated using spate irrigation.

In addition to the Saudi-led air and naval blockade on Yemen, the lack of rainfall is hurting the the agricultural sector  in Yemen, as less fruits and vegetables are finding their way to local markets. Many Yemenis go to sleep hungry – if they can sleep at all – and a large portion of them are internally displaced or without jobs due to the ongoing crisis.

Many Yemenis are unable to make sense of the conflict. They’re finding it difficult to understand and accept how everything could go so wrong, from the bombing and the fighting, to the lack of rain.

Beside the lack of rain and the blockade there are many other major problems facing Yemen: A severe fuel and water shortage; civil war; the Saudi-led coalition’s airstrikes; anti-aircraft rounds falling on civilians; unexploded ordinance; monopolies on basic goods; food unavailability; and IDPs. This is only a part of the long list of misfortunes Yemenis have been forced to confront.

Every year seems to get less rainfall than the previous. The trend is continuing this year and the country is more rain-scarce than ever. Locals point out the reduction in the amount and frequency of rainfall can be observed easily. For example, it usually rains intensely almost every day during summer throughout the country. This year, however, it has rained only a couple of times and in very small quantities. Most notably, Ramadan (the ninth month of Muslim calendar, when Muslims fast) has witnessed daily intensive rainfall in recent years. However, Ramadan this year saw no rain since it began on June 18th, apart from a minute or two of sprinkling rain.

Moreover, rain harvesting systems in place in blood-stained Yemeni cities are yet not as productive as they need to be. Mostly, rain water gets wasted running off to the sea or to the desert.

It is important to mention that Sana’a witnessed a generous two weeks of rainfall starting August 3, apart from the rare brief spells of light rain. Those two weeks of continuous heavy rains were over soon, even as many people thought that summer had just begun. Nowadays, although summer is over and fall has arrived, the weather is unbearable and hotter than previous years. It seems that summer has made a comeback after a brief intermission of showers.

Yemen, despite its rich history of efficient water management, has failed to manage the current water situation. Management has been inadequate even during the rainy season due to corruption and a lack of serious attention to the water issue, which is often given less priority than it should be (despite the country facing poverty both in terms of income and seasonal rainfall).

Also missing the rains are those who, instead of fetching water from far off wells or crowded public taps, fill their large containers by just placing them out in their yard or on top of their roof.

Many might think that the lack of rain this year is a curse– and it has obviously had negative consequences– but to another group in some ways it is a sign of mercy. What they are grateful for is not what the rains have failed to provide, but what lack of it has prevented. Many people on the streets revealed their fear of the health and ecological problems which would have reared their head if rainfall had been generous like past years. Due to the fuel shortage, garbage trucks have been few and far in between. With trash bags were all over the streets, epidemics such as diarrhea, dengue, cholera, typhoid, and diseases transmitted by flies and mosquitoes could have spread quickly. As it is, since the outbreak of the war, thousands of people in the coastal city of Aden have been infected with Dengue fever. Besides, rain water carrying the moldy trash could have run through the streets and reached farms and Waste Water Treatment Plants, giving rise to ecological problems that would have been difficult to deal with in a time of limited resources.

Another group of people who consider the lack of rain an opportunity are those who collect firewood. If rain falls generously and trees are dampened, it will be quite difficult for them to get firewood or alternative cooking fuel.

In other words, some people’s disasters are other’s benefits.

A few areas in the country have received adequate rainfall this year, such as Hajjah governorate. Some people who visited villages in Hajjah say that greenery has covered its mountainous areas and the brought temperatures down. Many other villages have received some amount of rain that, even though not enough, helped water crops and trees to an extent. The two weeks of heavy rains in Sana’a also showed that something is better than nothing. The earth was at least irrigated and its groundwater repository recharged. 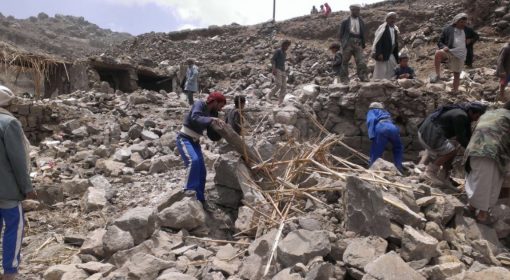 A Plan for the Middle East