Posted by Adel Zolail and Frank van Steenbergen
May 3, 2017

For reasons no one can explain, a war has been raging in Yemen since 2015. It is clear who the culprits are, and the solutions seem simple – just stop and do something else. But tragically no one seems to bother to resolve.

The airstrikes and ground fights have by now taken an estimated of 10,000 victims. Compare this to the 350 deaths during the struggle in the Arab Spring that preceded the war.

Adding to this number are numerous tragedies – those who suffer, get sick, get hungry, and die from the destruction of vital water infrastructure: drinking water, water treatment, irrigation.

The war in Yemen has destroyed many things dear to human life. Important services have simply disappeared. For instance, an estimated 8.5 million people no longer have access to safe drinking water, which has led to high levels of morbidity. Other war targets have been the facilities to use short-duration flood waters to irrigate land. This practice called ‘spate irrigation’ (www.spate-irrigation.org) is an ancient heritage, passed down the generations for thousands of years in Yemen. It makes use of the seasonal, short-term floods in normally dry rivers to water crops and grazing areas, and to recharge groundwater. An estimated 200,000 ha are covered by such systems in Yemen.

Spate irrigation systems were attacked in the bombing campaigns.  In war, however, such civil structures are not supposed to be targeted.  According to Article 14 of the 1977 Protocol Additional to Geneva Conventions[1], starvation as a means of combat is not allowed: ‘’it is prohibited to attack, destroy, remove, or render useless objects indispensable for survival of the civilian population – such as foodstuffs, crops, livestock, water installations, and irrigation works’’.  This has not happened in war-torn Yemen: Irrigation infrastructure was targeted directly, making systems hard to operate, causing more neglect.

Agriculture is a vital sector for food security for Yemen. More than 70% of Yemen’s people depend on agriculture either directly or indirectly as their economic foothold. Yet this harmless, innocent sector has been brutalized like anything else in Yemen. It is estimated that the war damage to the agricultural sector is already more than 16 billion dollars (http://www.saba.ye/ar/print460417.htm).

The spate irrigation systems in the coastal red sea zone of Yemen – the Tihama – were the food basket of the country. The Tihama produced most grains, livestock, and export fruits in the entire country. But in the current war, buildings and infrastructure of water systems have been hit and the equipment used for cleaning the canals, spare parts and machine stores of Tihama Development Authority have been destroyed. Below are the images  of Wadi Siham branch in Waqer Area of the Tihama Development Authority that has been wilfully destroyed.  In addition to the physical damage a lot of documents and computer files, containing data and studies carried out for many decades, have also been lost. From this direct damage followed a larger indirect damage. It is the nature of the flood based irrigation systems that they need to be taken care of constantly and intensely. Regular maintenance is required to keep the canals open and make sure they can carry the flood water when it comes. Indirect impacts of the war however have includes the accumulation of sediments in the diversion structures, main and sub-main canals;  as well as growing of harmful trees at the bottom of the canals. As a result, the Wadi Siham spate irrigation system only runs at 50% of its capacity, as confirmed during meetings with farmers and Water User Association members in Wadi Siham.

There has been a descent into poverty: production in the country’s food basket has halved; income severed and food prices gone up; employment opportunities disappeared.

The socio-economic situation in Tihama’s wadis is similar. The percentage of land owners is less than 30%. Poverty rate is more than 80% because of the scarcity of resources and the manifold crises in the country.

We interviewed several farmers. Hasan Qadhy is one of the richest farmers in Wadi. He is the head of an agricultural association and a businessman who is well-respected in his society. He has a home in his farm and four wells for irrigation and domestic use. He owns 109 hectares on which he grows mango, tobacco, and fodder. He has discontinued the last two crops as it is too costly to pump groundwater to supplement the irrigation by floods. The war has slashed Hassan’s income, with the unavailability of fuel and spike in prices. He didn’t get broke because he owns a lot of land.

Abdo Ali, another farmer, owns 0.65 hectares where he mainly cultivates fodder. He does not have a well, but has three goats and 15 sheep. His yield is used for food and fodder, but for less than 3 months. He is illiterate but has tried to send his sons to high school. Abdo Ali is shaken badly by the war. It has become more costly to produce fodder, which now few people can afford to buy. Abdo’s income from the farm is not enough, and he needs another source of income – which is simply not there. So he goes broke ever so often now, and has to borrow money or sells animals or household goods to make ends meet.

Worst still is the fate of the many tenants and farm workers – 70% of the agricultural population—facing the worst at the receiving end.  Sharif has a family of six. He was very poor to start with but his options as a farm worker are getting increasingly limited. In the farms of rich farmers, some economic ventures have stopped – such as the cultivation of fodder (not profitable) or tobacco (cannot afford to pump groundwater). It is the family of Sharif where famine is now a real prospect, in an area that used to be Yemen’s breadbasket.

This July, a new flood season will start in Wadi Siham. This used to be a time of anticipation and blessing.  This year however the flood may bring little as the systems are not prepared to deal with them. In fact, they may suffer from the sediment-laden floodwater running across them.

Descent into starvation. One wishes that those forces that had the energy to start a senseless war will have some morals and will to use the same amount of energy to end the conflict. We may also want to trigger Article 14 of the Protocol Additional to the Geneva Conventions on the Protection of Civilian Persons in Time of War.

[1] 1977 Protocol Additional to the Geneva Conventions of 12 August 1949, and Relating to the Protection of Victims of Non-International Armed Conflicts (Protocol II). Note: this protocol has been signed by Saudi Arabia, a main perpetrator of the air campaigns in Yemen. 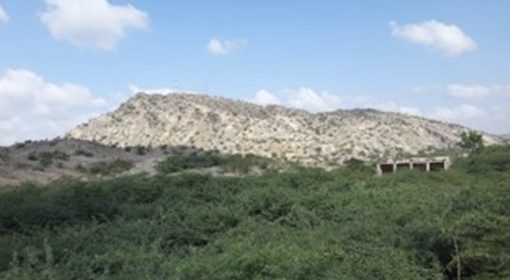 One very hard hit for Yemen