There are, however, substitutes. Some of them are very mundane but very effective nevertheless. An option that holds much promise is the application of natural or crushed rock dust, also called ‘stonemeal.’ This practice dates back to ancient Rome.

Application of rockdust replenishes the soil with a range of minerals—both macro and micro-nutrients. It also improves the physical, chemical and biological quality of the soil. At the field level, these effects translate into a number of benefits, such as improved workability of heavy clay soils, higher quality and yields of cultivated crops, and lower — It increases production and improves quality of the food produced
— It is energy neutral
— Some parent rocks (such as olivine) sequester carbon
— Some rock dusts (made of zeolite and basalt, for example) improve the soil’s capacity to retain moisture, and therefore reduce the amount of water needed for irrigation.

Rock dust/ stonemeal containing a variety of minerals are being used around the world (usually in combination with an organic fertilizer). Watch these fascinating examples  on TheWaterChannel, and start remineralizing now! 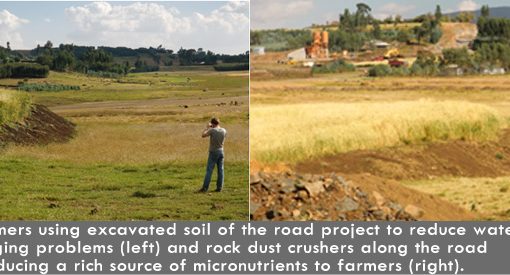