With globally 1 billion ha of land affected by salinity and various processes driving up the area, dealing with salty soils and salt water is part and parcel of secure future global agriculture. Starting in 2014, Salt Farm Texel, Jaffer Brothers and MetaMeta have been introducing new salt tolerant potato varieties in Pakistan in part supported by the ‘Securing Water For Food’ program. The experience of two cropping seasons is that growing salt tolerant potatoes either on land that is salinized or using irrigation water that is saline is eminently feasible. Different potato varieties were screened for their salt tolerance and introduced in salt affected parts of Punjab and Sindh Province. The trials show that lives of people in Pakistan, living on degraded lands, could be transformed, generating income from lands that were previously as good as abandoned.

The trials of the last two years that have focused on saline soils in Punjab and Sindh provinces of Pakistan. Before the potato season started soils on various plots as well as waters from irrigation canals were tested for their Electrical Conductivity (EC), determining the salinity levels of both water and soils. High EC levels were measured in the soils from Sindh whereas in Punjab the levels were lower, but they masked another challenge, i.e. high sodicity of the soils. High levels of sodium salts inhibits exchange of essential plant nutrients between soils and plants spoils the soil structure – reduces the ability soils to transmit water (because of crusting and compaction).

In October and November farmers in Sindh and Punjab planted 10 different varieties of salt tolerant potatoes, both ‘table’ and ‘French fries’ types. With a severe attack of Late Blight in the potato crop in Punjab the harvests were preponed and took place in late February and beginning of March. After the harvest was measured and results could be compiled, the sales could start and the tasting could begin.

Analysing the past seasons achievements, results have been remarkable: 7 of the 10 newly introduced varieties have done very well on the 6.4 hectares where they were tried out. An overall total average yield of 21 ton/ha was achieved. This is higher than the Pakistan average – even though the potato varieties were grown on marginal soils and irrigated alternately with sweet and brackish water. The average results are even better (26 ton/ha) when some of the very saline soils in Sindh (EC > 10) are excluded. In summary, an average of 5% increase in yield was possible, despite the severe challenges of Late Blight in Punjab and the extreme saline soils in Sindh.

However, during the trials the market conditions were adverse and abnormal, with production of potato outnumbering local demand. For 2016 countrywide an estimated 3.7 MT was harvested vis-à-vis a 3 MT domestic requirement. The result was a volatile local price of potato has been particularly volatile to hoarding of traders as well as unstable export markets. Although the government of Pakistan announced it would export 500,000 tonnes of potato, this did not make a difference and did not prevent the financial losses that farmers had to take the past season.

From the estimates farmers have had on average a total cost of 384 USD/ha versus a total income of 262 USD/acre, considering average yield 20 ton/ha of table potatoes. This net loss of over 100 USD/ha has numbed the entire potato market. It poses a great challenge to the seed potato market. Farmers moved into a strategy of self-protection and are set to rely on own stocks of seed potato for the coming season or possibly chose to grow on loan. The local market in seed potato slumped down. Only large potato processors (fries and crisps) that have emerged over the last years remained as buyers and struggled to find sufficient potatoes in the right variety and quality.

Hence though the trials have shown that good yields can be achieved on degraded soils and using saline water, the uptake of the new seed potato varieties was limited. The challenge will be in the coming trial season when prices may be different again – to create a marketing success out of the new varieties and the better agronomic practices. 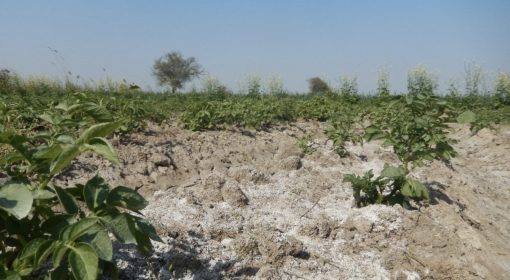