We are in Badakhshan. This is the high mountaineous border of Tajikistan and Afghanistan and only the pristine Panj River, fed by melting water from many glaciers in the region, separates the destinies of the two countries. Afghanistan: for decades in turmoil and tormented, but resilient. Tajikistan: rudely awakening to independence but now  steadily finding its feet.  Though there is a physical border, there is no human border in this altitude area. People from either country belong to each other’s families, visit one another, share the same beliefs and go to the same markets.

The mountains in Badakhshan, like anywhere else in the Himalaya Region, sometimes move. This is what happened in Ghostaf on 8 July 2017 at 0330 in the morning. It was a day of unusual rainfall and strong winds, even uprooting trees.  Then in the middle of the night a landslide occurred on the Afghanistan side of the river. The landslide covered the small land fan along the river where six Afghan families had their houses and farmland. The landslide even went further and blocked the river. Water in the narrow valley rose rapidly, threatening the eighteen houses on the Tajikistan side of the river. Several people from the community just covered by the landslide on the Afghanistan side climbed up the rubble. They started to call and flash lights to alert their brethren on the other side.  People in Ghostaf woke up and started to move from their houses. As this happened there was a second large rumble and a third one, and two more landslides followed the first one. Trees in the Panj river standing as testimony Raksana was among those on the Tajik side who were warned 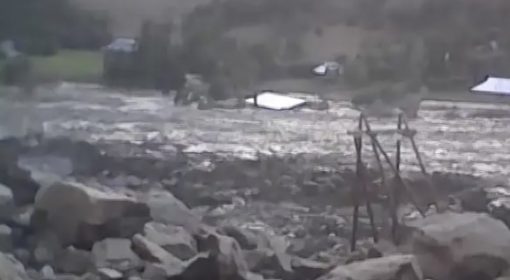