Sometimes fantasy can become reality. Although in this case we hope that is not so. Salmon Water Now’s new video, 3012: The Space Salmon Incident was intended to be a cautionary tale for Earth Day. A way to tell the story about salmon and water in California that is just a little bit silly, a little absurd. But in the context of political reality, this video may be useful to help people understand the dangers ahead.

California Senator Diane Feinstein seems determined to destroy California native salmon in order to give the Westlands Water District whatever they want. The Golden State’s senior senator reportedly is circulating language to be attached to an appropriations bill that would dramatically alter the way water is allocated in her state. The changes would allow more water exports south of the Delta, remove protective Wild and Scenic River status for a ‘portion’ of the Merced River, and renege on promises made in 1992 under the Central Valley Project Improvement Act to balance the damages brought by the Central Valley Project, and institute water contract reforms while further relaxing water sale rules.

There was outrage and concern over Congressman Devin Nunes’ HR-1837 when it was introduced and then actually passed by the House of Representatives. In fact, Senator Feinstein was among the loudest voices calling for it’s defeat. But now it seems that her objections have turned into a blueprint for her own re-election gift-wrapped legislation for Westlands and Big Ag.

Here is the short list of what the Senator’s legislative proposals would mean:
• Remove a Wild and Scenic River designation— the first time in our Nation’s history.
• Export more water from one of the most endangered ecological communities—the Sacramento San Joaquin Delta—one of the most important estuaries containing critical habitat and spawning for California Salmon and where 20 species face extinction.
• Facing an increase of water divisions for export, scientist predict a further ecological crash of Salmon, other fish populations and the Delta food web.
• The impacts to the watersheds and surrounding communities from these water diversions are being ignored. All of these moves are a way to go around state and federal processes, that would divert and drain even more water from these critically impacted ecological treasures.

It would be a travesty if it is allowed to happen. These icons in California, and one of the nation’s most important estuary that feeds and spawns salmon throughout the west, depends on river habitat to survive. It’s not just the salmon that are in danger, California is a place where millions of migratory birds along the Pacific Flyway feed on their migratory routes. They also are threatened by those powerful interests seeking federal intervention to assure they move to the head of the water bucket line. All this comes at a time when the prestigious National Academy of Science confirms that the system is out of balance. That too much water is being taken and that this over-allocation of water and diversion of needed flows is the basic cause for the ecosystem collapse.

We hope you will watch and share SWN’s newest video, 3012: The Space Salmon Incident. Sure it’s got some silly stuff in it, but it is time for people to speak up about the real horrors that are pending in Congress. You can make a difference by forwarding this video to your friends and family and asking them to call or write their Senator to stop this end run around state and federal laws that protection our environment, water, and endangered species. Today it is California’s last remaining Wild and Scenic Rivers and on of North America’s most important estuary that are at stake. Tomorrow it might be the river or estuary in your neighborhood. Greed should not be allowed to take this heritage away from future generations. Watch, 3012: The Space Salmon Incident! 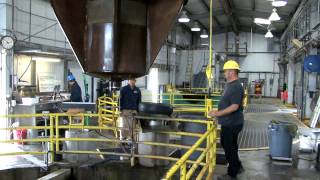