The New Dutch Water is an important line of defense in Dutch history. The great historical value led to registration for the World Heritage List (1995) and the list of national monuments as well as to the status of National Landscape (2005). The New Dutch Waterline was replacing dating from the late 17th century Dutch Waterline and bears since 1871 this new name. An important difference between the old and the new line is that the city of Utrecht now fell within the board. The waterline was like a protective ring around the cities of Holland, 85 kilometers long and 3 to 5 kilometers wide. 46 forts the line stretched from the island in the Zuiderzee Pampus to the Biesbosch. In addition, the board consists of five fortified Muiden, Weesp, Naarden, Gorinchem and Woudrichem. 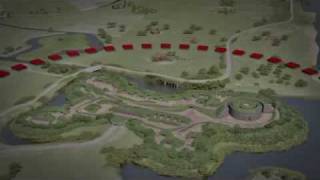