Connecting with Anant and Vivek Chaturvedi in Kanpur (Uttar Pradesh) during my 2015 trip was a game changer in my efforts to introduce the scythe to Nepal, India, and other parts of Asia. After one day of scythe trials in the field, they recognized its potential, and Vivek suggested that the next Spring harvest of winter wheat would be a good opportunity to launch the scythe in India. During March/April 2016, he had organized demos in 30 villages covering most of the Uttar Pradesh state and beyond, reaching as far as Bilaspur (in Odisha), and Indore (in Madhya Pradesh). In one of the villages, the demo was attended by the Minister of Agriculture himself. Participants all agreed that the scythe is an appropriate alternative to a sickle.

The implementation of this initiative is well on its way. While all of the scythe equipment for the demos was initially imported, by now almost all of the equipment is being made locally in India (snaths, cradles, attachment rings, peening jigs, and anvils), and only the blades are being imported.

During the previous eight years, I had been searching for a willing organization (either governmental or NGO) to go forward with a project like this, and the results were disappointing. It took an independent local group to make this happen. These are committed people with honest concerns and a true vision, who fully understand the needs of the local farmers. “Thank you” to the Chaturverdis of Kanpur!

I want to also give thanks to all who have contributed in various ways during my journey to get here. For this recent trip, I was joined by Sy Schotz, an organic farmer who has spent extensive time with Peter Vido’s family at their farm in New Brunswick. Sy’s knowledge and experience was a great contribution to this project.

It is especially rewarding for me to see that the scythe has been embraced as a beneficial alternative for small farmers in India. 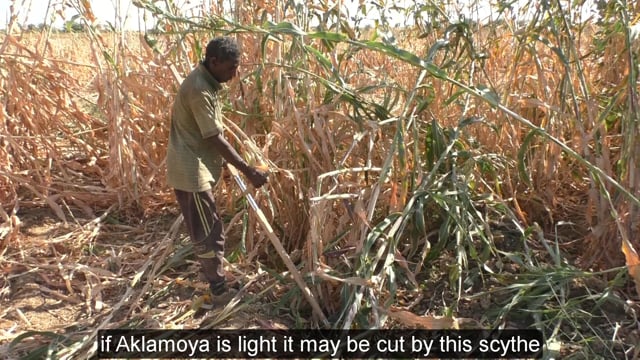