Blue-and-white three-wheeler motorized rickshaws, droning a constant drone as they lurch their way along unpaved roads, is a common sight in rural Ethiopia. The rickshaws are commonly known as ‘Bajaj,’ after what was perhaps the first brand to break into the Ethiopian market.

As a vehicle, as a transport solution, Bajajs are neither elegant nor powerful. Around 2.8 m long, 1.3 m wide, and 1.8 m high, they have the aerodynamics of a shoe box. The 200 cc engine packs a mere 12 HorsePower, less than most Bajaj motorbikes. Bajajs are found most wanting on unpaved rural roads. Drivers, passengers, and cargo bounce up and down, sway side to side, as the vehicle moves ahead.

Nobody romanticizes the Bajaj. Not in Ethiopia, not in South and East Asia where they come from. There are jokes aplenty about their weird appearance, their small turning radius, and the racket they raise as they buzz around racing each other. When they feature in pop culture, it is mostly as kitsch elements:

Elites and governments often view motor rickshaws and similar vehicles as noisy and dirty things thatspoil the urban environment. In Mumbai and Mombasa, they are banned from plying in business districts in city centres. Most countries have been making it more and more difficult to purchase a motor rickshaw, through additional duties and permit requirements.

Coming back to rural Ethiopia… Bajajs are banned here too. Most village (kebele) and woreda (district) officials prohibit them from plying on rural roads. Their biggest concern is safety. The three-wheeler design is not very stable especially on unpaved, bumpy rural roads. A study being conducted among more than 400 women and men from road-adjacent communities and key officials (Gender Mainstreaming in Rural Road Development and Use in Ethiopia) highlights that they all consider Bajajs unsafe. When asked to recount vehicular accidents from the recent past, most incidents mentioned involved Bajajs.

These concerns are all very valid. However, at the same time, the respondents recognized the Bajaj as an essential component of their mobility. Other transport options include minibuses (seating capacity 15 people) and midi-buses (that can accommodate 35 people) that ply once a week, on the day the weekly urban market convenes (between 5-15 kms away).

Bus operators are not keen on plying on rural roads any more frequently. They are discouraged by the low quality of the roads and apprehensive of not getting enough passengers on non-market days.  Smaller transport options more adapted to rural roads (also known as Intermediate Means of Transport (Read more: https://goo.gl/HT7NRd ) are not around. Prices of animal-drawn vehicles such as donkey carts have risen more than 5 times over the past few decades, so they are becoming less and less common. Bicycles are not produced domestically in Ethiopia. Most of them are imported from China. Due to a combination of import tariffs and increasingly unfavourable exchange rates, bicycle prices have shot up too (currently 150-200 Euros for a basic bike).

So rural Ethiopia ends up being a predominantly walking world. Feeder roads (unpaved roads connecting villages to urban centres) are used for walking, sometimes along livestock (people are culturally averse to the idea of riding on donkeys).

In such a scenario, Bajajs play a critical role in plugging the transport gap. Almost every household knows a Bajaj driver or two who they can call when they need transport. When returning home from the weekly market, 3-4 people can collectively rent a Bajaj if buses are not available. In medical and non-medical emergencies (government-operated ambulances are available for pregnant women), Bajajs are often the only available option. Besides, what they charge is competitive with bus fares.

Of course, in catering to the rural population, Bajajs are flouting restrictions on them operating in rural areas. However, this should be seen with in the context of how highly rural communities value them.  As part of the study mentioned above, 33 women and 12 women participated in an exercise where they were asked to take photographs of (among other things) what they considered most important for their mobility. The participants were based in 5 different locations across two different states (Amhara and Tigray). A prominent theme common across all presentations was the ubiquitous Bajaj, driving on unpaved feeder roads, sometimes along steep hilly roads, even across seasonal river beds. Despite all their disadvantages and the inescapable safety issues, Bajajs are a life saver. This account is not an argument for formalizing the plying of Bajajs on unpaved rural roads in Ethiopia, despite the authorities’ very valid safety concerns around them. However, any appraisal of the roads, transport, and mobility in the region must take into account the strong demand for Bajajs’ services and the high value rural communities accord to those . This merely underscores the urgent need for Intermediate Means of Transport (IMTs)—that can provide the transport services rural communities need, with greater safety and comfort for the customers and profitability for the operators. 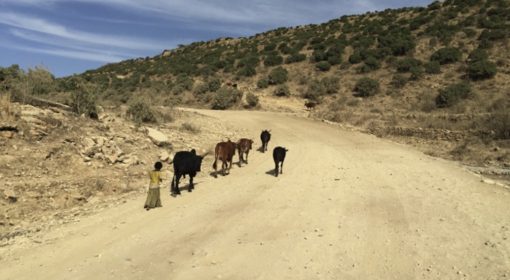