Public food programs have been crucial to food security at many times and in many places. They handle enormous amounts of food– but can they also not be  used to further water security in arid areas, and supply food with a smaller water footprint?

This is an emergency granary in Sassari in Sardinia, Italy, built in 1608. During war or famine, grain stocks were requisitioned at minimum prices, stored in this Frumentaria (Italian: ‘Wheat Store’) and sold off the next year. Because of the suboptimal storage conditions, grain entered fresh but came out moldy and unappealing. After the mid-nineteenth century, it has been used variously as a barracks, a residence and a government office. It is a museum at present.

10,000 kilometres to the southeast lies the Golghar (Hindi: ‘Round House’) along the Ganges in Patna, India. This somewhat-spherical granary was built by the colonial British government in 1776 to store grains as a buffer (capacity=140,000 tonnes) for its army.

Since India became independent in 1947, Golghar has been used as a granary to store foodgrains that are made available to the poor at a fraction of market prices under its Public Distribution System. The system currently works through 5 million fair-price shops set up to reach India’s 400 million poor.  (A new legislation, pending implementation, is set to broaden the PDS’ reach to over 800 million people. That’s about 12% of the world population.)

Such public food systems are not uncommon across developing countries. And they have served as important safety nets, protecting a large number of poor from the worst effects of fluctuation in food prices. Therefore, historical storage structures such as the Frumentaria and Golghar have come to symbolize much that is good with such public food systems, despite all their problems (corruption, spoiling of stock, and mistargeting of beneficiaries to name a few).

Today, India maintains the second-largest stock of grain in the world, with the government spending almost 14 billion dollars on it every year. This gigantic reserve of food can also be seen from the perspective of its water footprint. Most of it comprises of the water-intensive rice and wheat. Government policy in general and the Public Distribution System in particular have promoted these crops, even in regions where water resources are under severe pressure. Over time, they have become staple parts of diets in these areas.

On the other hand coarse grains (such as millets, sorghum, maize), that demand much less water and inputs, have been sliding consistently down the government’s priority list of subsidies, inputs, infrastructural support and procurement preferences. For every increase of 100 tonnes in India’s food production, rice and wheat make up for around 90 tonnes and coarse cereals only 5-6 tonnes. The area under coarse grain cultivation has declined constantly since 1971.

This trend is significant at multiple levels. India is simultaneously grappling with hunger (one-fourth of its population still goes hungry), malnutrition (a third of all malnourished children are in India) and groundwater depletion (60% of groundwater resources set to reach a critical stage within 20 years). This means that a viable approach to food security demands not just achieving higher production, but also improving nutrition. And to be highly resource-efficient while doing so.

Coarse grains such as millet, barley and sorghum have been an integral part of diverse food systems in India’s drylands.  For hundreds of years, they have flourished in resource-scarce conditions and provided sustenance to communities living there (Watch video below: ‘Dalit Food Systems’). They are also decidedly more nutritious than ‘fine’ grains like wheat and rice. As India desperately seeks new ways to strike a balance between growing hunger, falling water tables and a slowing economy, it could do much worse than looking at coarse-cereals as ‘nutri-cereals‘ and helping them find their way to more granaries, more plates. 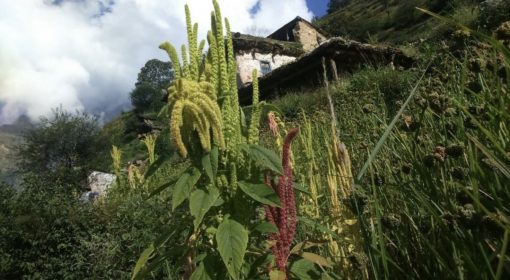