Pakistan, a land of multiple geographies and cultural mosaic after a decade (12 years) is once again hit hard by the flooding due to heavy monsoon torrential rains, which have been unprecedent and broken records of past thirty years. Sindh province alone recorded a 470% increase in rainfall from the months June through August 2022. The record rainfall this summer first pushed Balochistan into its worst flooding. Later, Sindh and southern districts of Punjab and now the glacier-melting has affected KPK province as well. Having barely recovered from the losses incurred in the 2010 ‘super floods,’ the local population is once again in makeshifts. (The 2010 floods affected around 20 million people; the ongoing floods have already affected 33 million—a figure that is set to increase).

As per statistics of the National Disaster Management Authority of Pakistan, the 33.05 million people affected so far span 80 districts of Pakistan, of which 45% reside in 23 districts in Sindh district. The death toll has crossed 1300. Around 1.4 million houses are damaged either fully or partially. While the nature of damage is the same, the scale of infrastructure destruction in the 2022 floods is higher than the 2010 ones. Around 2 million acres of crops and orchards have also been affected, including at least 304,000 acres in Balochistan, 178,000 acres in Punjab, and 1.54 million acres in Sindh.

Research and Development Foundation (RDF) has conducted a flood situation analysis in Balochistan and Sindh province, which reveals that people in affected areas have lost their food stocks to more than 70%. Agriculture losses, such as damages to fruit orchards, are set to further aggravate the food security and nutrition situation in affected areas. Outburst of ten dams in Balochistan has washed away hundreds of villages, thousands of houses, agriculture land and orchards. Selling livestock to meet daily needs, particularly the medical expenses and purchasing shelter tents etc is a negative coping mechanism which has been observed among the affected people. This will lead to further deterioration of their economic conditions in days to come. In the absence of disaster management mechanisms and facilities, hundreds of thousands are in camps that they have been erected along roads, and on embankments and other higher places. These spontaneous camps lack sanitation, water, hygiene and basic services. Sleeping hungry on the roads and in makeshifts is common across many sites in affected districts. Every-where there are sky-piercing cries of people, who were already struggling with poverty and other social development issues.

One of the major reasons of flooding in Sindh is the encroachments upon old water ways. Many smaller and big villages are established on water ways. Drainage pathways are turned into agriculture fields, mainly in Sindh. Having seen the devastation in 2010, it is strange is to see no initiatives from the government towards evacuating these. This is a testament to how strong feudal-led governance systems are in Pakistan, leaving people with no choices but to pray.

During every flood event, district Badin, Sanghar and Mirpurkhas face worst flooding due to breaches in LBOD (Left Bank Outfall Drain—a drainage canal carrying Indus waters). Despite a full-fledged LBOD secretariat in Hyderabad with a corps of irrigation and infrastructure engineers, the faulty design, weak structures, turning points and spill-overs are not rectified to save cities and villages. Dadu district always gets inundated as drains inevitably breach and water gushes down the mountainous ranges of Balochistan province.

Although Pakistan has a history of floods which affect millions of people directly and deal a deadly blow on the micro and macro economy and infrastructure, we never learn how to tackle them and covert them into opportunity. This all needs a paradigm shift in irrigation and drainage management. Otherwise, resilience-building, climate change adaptation will remain a subject of conferences and meeting rooms only. 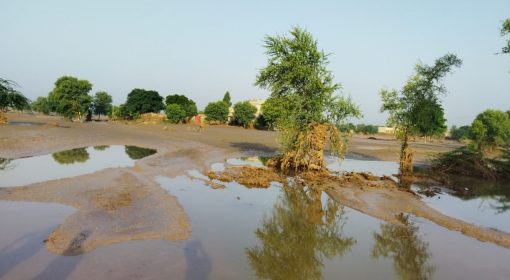 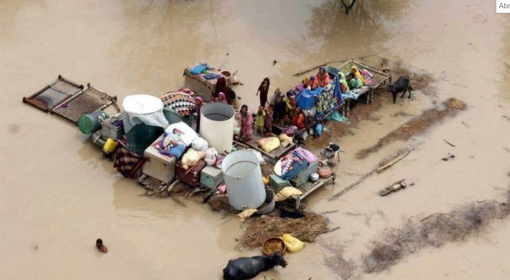