Feeding the growing population is one of the biggest challenges, the world is facing today. The issue has even been picked up by the UK Ministry of Defense in its recent strategic projections: Out to 2040. Defence strategists assess that globally we may have enough water, food and energy – but the issue is that of local shortages leading to so-called ‘multiple stress zones’. Where a fragile resource base and demographic growth combine, areas become increasingly instable. This can undermine global security (this, of course, is the pre-occupation of the Ministry of Defence)  – particularly in weak states. The multiple stress zones now cover Africa and South Asia. They are likely to expand. Driven particularly by climate change (called a ring-road issue by the Ministry of Defence), they are set to include Southeast Asia and East Asia as well. Have a look at the map below (taken from the Out to 2040 document).

Especially in dry land areas, getting water for agricultural purposes and pastures is a challenge. The problem is most severe during the dry season. Water arrives for short periods and the challenge is to retain and buffer up as much as possible Thus, ensuring sustainable food production requires efficient and effective management of water buffers. One example of such an area of vulnerability is the dry mid and lowlands areas of Kenya.  Insecurity, whether related to food or law and order, is never far away in this part of the world – vide the Al Shabab infiltration in 2011 and the violent riots in the lower Tana Delta in 2012.

Here are examples of what can be done in such potential hotspots. In Kitui and Kibwezi, ‘3R’ projects were implemented. 3R stands for the recharge, retention and re-use of water. This essentially involves buffering the water during short high rainfall periods and making sure it is available during the stress periods – either as shallow groundwater, secure soil moisture or in local reservoirs.

The projects, supported by Rain Foundation, focus on integrated water management to ensure food security in the area, either by ‘availing food on the table or money in the pocket’.   In Kitui County, seven sand dams are being constructed to increase water availability in the area that can be used for multiple purposes (domestic uses, livestock watering, micro irrigation etc) throughout the year. Sand dams build up a small local aquifer in the river bed that can store the water from the occasional floods when they come. It is a relatively low-entry technology, as it mostly uses locally available materials and largely involves the community for construction. SASOL, the organisation that gives technical support in the sand dam construction, has also developed a green house that produces tomatoes for market in Kitui, using water from one of the sand dams. In other sand dams groundwater is pumped out for fish production.

In another example, in Kibwezi country, runoff ponds are being constructed and used by the community for various production purposes, including poultry, cattle herding, growing vegetables, availing sufficient pasture for cattle throughout the year etc. Although constructing these runoff ponds is labour intensive and might require relatively high initial investment (for the trough and pump), they have low running costs and good economic benefits. In addition to the runoff ponds, farmers in the area get technical support from the ministry of agriculture and livestock, and other NGOs. The support includes guidance on ways of ploughing to maintain soil moisture as well as access to better seeds. This has boosted production and enabled farmers to have surplus for the market. Thus, easy access of water regardless of season has made a huge difference to home consumption and market surpluses. Availability of water near them has also allowed farmers to consider other  business opportunities, such as making and selling bricks.

Thus, food security issues in multi-stress dry land areas, especially in Kitui and Kibwezi areas of Kenya are being addressed through better water resource management, using appropriate technologies. There is an enormous range of 3R-type technologies (www.bebuffered.com). Particularly when they are applied at scale and intensity, they can make all the difference: changing the moisture in the entire area and with this the capacity of soils to fixate nutrients, causing shallow groundwater tables to come up and changing the micro-climate.  There is much to be said for intense rather than piecemeal efforts made with coordination among various stakeholders like the government, donors, researchers, community and others. Access to market and credit shall be considered in the integrated effort to make a more sustainable change in this regard. For instance, credit facility to construct runoff ponds is very important, considering the sustainable economic returns in the medium term.

So ‘Out to 2040’… rather than investing in military capacity it may be wise to reroute resources and work on local water security, using the large number of water buffering options that exist and also making sure that what is done is done right.  At the same time we have to work on controlling the water we consume, especially in the stress zones. It is conceivable that there will be a time in a few decades from now that we would have used all the options to buffer water in an area. We have to make sure that by that time a fine balance has been achieved, between what we use and what we renew. 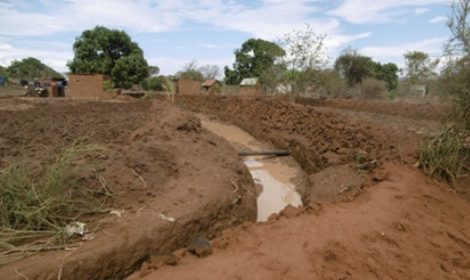