Kenya: an economy that is growing quickly and a country that has emerged as one of Africa’s star performers. New transport infrastructure, roads and railways; a penetration of mobile phones and the innovative ‘Mpesa’ mobile money network; diversity of enterprise; the envy of neighbouring countries.

And yet there is the other Kenya – with 28 droughts in the last hundred years, a stat that is not improving with the passage of time. The last ten years had three droughts. Crop failure, livestock deaths, increase of food prices, severe food shortages, hunger, diseases and conflicts continue– now also driven by climate change, land degradation and population growth.

Mbitini, Kitui
Many things can be done to break this long lasting trend. A major one is to transform the arid and semi-arid landscapes so they retain much more of the rain water that comes down in two short and intense wet seasons. Within this repertoire of water buffering measures, the harvesting of water along the many roads is one of the most under-utilized ones. The practice is getting more and more common, but it still has a long way to go.

To demonstrate how road runoff harvesting can be used as a tool against drought, research was done in Mbitini Ward in Kitui County. As typically ASAL (Arid and Semi-Arid Land) region, its climate is hot and dry, with people highly dependent on the erratic, bimodal rainfall.

The majority of households in Mbitini do not have enough food throughout the year. Failing harvests means that families cannot sustain themselves throughout the dry spells. However, harvesting water along the ubiquitous roads can make all the difference, the research among 74 households found. In the study, the food security of households that practised water harvesting along the roads was compared with those who don’t.

The research showed that during both rainy seasons, the average income from farming is higher for those who practice road runoff harvesting. The difference is around USD 20 per household (53 with RRH – 33 without) after the long rains. After the short rains this difference is as much as USD 40 (93 with RRH – 53 without).

This income increase of USD 73 per year maybe compares favourably to the nominal investment of USD 24 USD  in guiding road runoff to and on the farm. The cost is low and mainly engages free off-season labour from family members. In Mbitini, Kitui County, road runoff harvesting is used to spread water on the land for irrigation directly or stored for brick making, watering livestock and supplemental irrigation. The type of road runoff harvesting designs utilized in the area are simple in nature.They mainly involve constructing soil bunds across roadside drains and excavating channels to route water into the farms. Mbitini is yet to realize the full potential of the practice, so farmers are encouraged to optimize techniques to reduce evaporation, infiltration losses and siltation.

Hence this postcard from Mbitini: with good news that effective and wide scale measures to address drought are there, alongside the still recurrent droughts. The solution does not need many words, but ‘just do it.’ 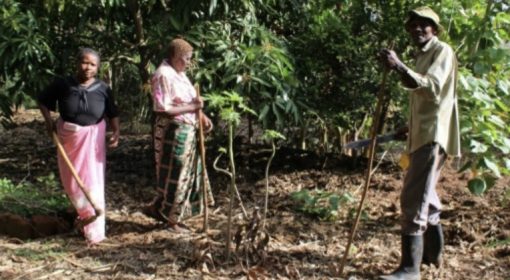 The Kenyan farmer who traveled his country