Postcard from Muizenfort close to Muiden, the Netherlands:
To protect Amsterdam from possible attacks and create a safe haven for the government and the royal family, a military defense line was created at the end of the 19th century. This is  the famous Stelling of Amsterdam – now in its entirety a UNESCO world heritage site. The Water Defense Line measured 84 miles, surrounding Amsterdam with a 10 kilometer radius. It consisted of 46 forts and batteries. Its hydraulic works could inundate the area surrounding Amsterdam at shallow depth, so that men and horses could not move. On the other hand, the water would be too shallow for boats to move.

One of the 46 forts is the Muizenfort – translated as the Mice Fortress. Where the name comes from is not entirely clear, but most likely it refers to the greyish military uniforms at the time.  The fort had a long history of guarding the critical area at the entrance of Amsterdam from the Zuiderzee as it was called at that time. When the Stellling was put in place the military works were upgraded. It was landscaped and camouflaged.

What makes the Muizenfort special is its system of water supply. It was surrounded by a moat but the fear was that an attacking enemy would poison this water supply source. Hence an innovative rain water harvesting system was used. Large part of the roof of the Muizenfort was covered by sand. The sand protected against shell attacks, and also helped filter the rain water falling on the roof of the fort. This water was collected and channeled through special drip pipes. From here the water was stored in an underground reservoir to tide troops over during times of attack. 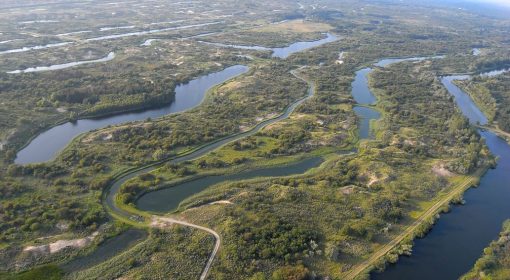