Floods triggered by unusually heavy rain – more than 5 times average – have inundated Sindh Province once again. After devastating floods of 2010, 2011, 2016 and 2020  (see map)– all with different histories– the current flood is of the mega category, as bad or even worse than the 2010 ones.

Fifteen million people displaced– many of them among the poorest in the world– taking refuge on roads or embankments, isolated and drinking polluted flood water.  Half a million houses destroyed and infrastructure–roads, irrigation canals and railways lines– heavily damaged, as they were covered by 2-6 meters of water. Transport almost at a standstill for weeks. However, floods are not only about heavy rain, they are about drainage too. The speed and direction in which the excess water is evacuated is an equal part of the equation. There are several major issues in this regard.

Firstly, the capacity of the main Indus to move flood water has been impaired over the years. Where in the past it took five days for a flood to travel from the main Sukkur Barrage to the tail-end Kotri Barrage, it now takes 14 days. This means a much larger volume of water, longer floods and considerable risks at the three barrages in Sindh as they have to handle an enormous back pressure. There are several reasons for the reduction in this capacity. First are the three bridges which have been built across the mighty Indus. All these three bridges have blocked the bed of the river, from a width of more than 12 kilometers to an opening of 1.5 kilometer or less. In normal times they reduce the velocity of the river flow and cause silt to be deposited. During floods they constrict the capacity to move the floods. The second phenomena is that the Indus flood plains that thirty years ago were still wild bush territory have been encroached upon and largely converted into agricultural lands, generally by large landlords. Hundreds of private embankments have been erected in these floodplains, severely reducing the capacity of the Indus to carry the floods. A third factor is that reportedly not all operational procedures designed for flood situations were followed. In particular some gates on the downstream Kotri barrage were kept closed to divert water, even as floods were imminent.  The reduced capacity of the Indus river to transport the floods prolonged inundation in Balochistan and Upper Sindh and also put the three main barrages in the province at risk.

Secondly, over many years, the overall drainage pattern in areas where heavy rainfall occurred has been changed. Roads and new canal embankments have been constructed. These often have limited cross drainage, and have altered the run-off patterns significantly. Additionally, housing estates, railways and local roads have also disrupted natural drainage pathways all over the province.  The precise effect of all of this is unknown and unmapped. In some cases it may be have helped to retain the floods and mitigate their destructive effect. In many other cases it may  have obstructed the passage of flood water and aggravated the impact of the disaster.

Thirdly, one special intervention that has had much impact on the flood pattern are the drainage canals which were constructed in Sindh over the last decades– the unfinished RBPD and LBOD. Both these outfall drain systems were developed primarily to remove excess water from the agricultural land, not stormwater. But of course, during heavy rainfall events, they  serve to channel storm water as well. This has had disastrous effect in earlier floods in Badin which received large volumes of stormwater through the  LBOD Spinal Drain. The modification of these drainage systems by developing flood water escapes at appropriate places could have reduced the degree of disaster, and could have even turned the flood water into an asset by allowing groundwater recharge in some of the adjacent desert tracks. On RBOD there is only one escape (and two more planned); on LBOD there is none.

Fourthly, compared to other provinces, Sindh is not well-equipped to deal with floods as a large portion of the farm land (35%) is water logged, hence having little capacity to absorb excess water during flood situations. This water logging is to a degree avoidable by more sophisticated water allocations and better diversion practice.

There was a time in 1998-2002 when droughts prevailed– water logging at that time largely disappeared and as a result crop production increased in Sindh. This holds an important message. It is important to reconsider irrigation duties and create more balanced situations for the different canal commands.

Hence, whilst working on flood mitigation the drainage agenda should be given due importance: removing obstructions on the main Indus by revisiting the bridge design and regulating flood plain land use; improved flood operation procedures in the irrigation systems; assessing and improving the modified natural storm water drainage system; making adjustment to the two outfall drain systems so they can cope better with stormwater; and reassessing the system of water allocation. All this gains more importance given that climate change is undeniably here to stay with us in Sindh. 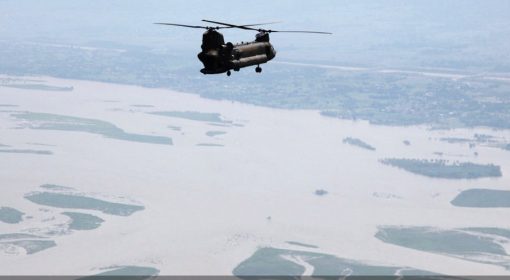 How the British did it better